Time has come for impeachment 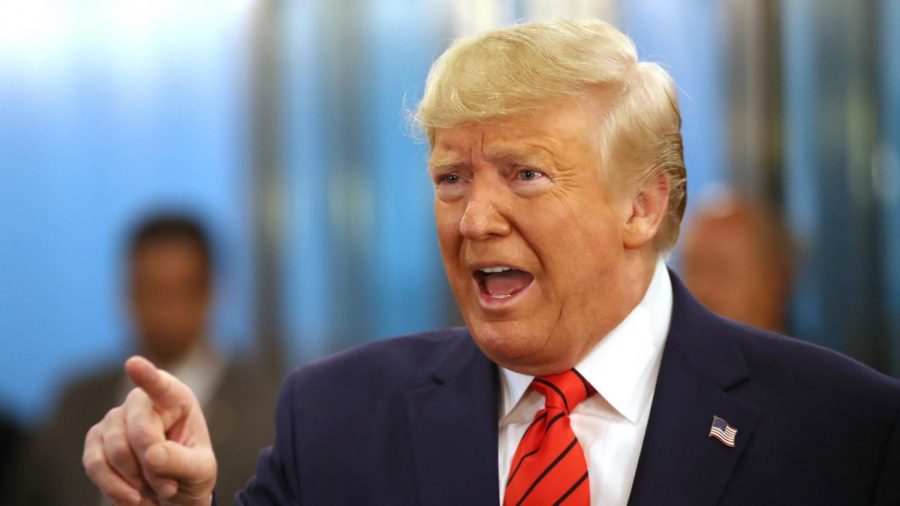 President Trump is one of only four presidents to ever face an impeachment inquiry in the House of Representatives. Some Democrats have been calling for his impeachment since 2017, but it wasn’t until September 2019 when the majority of the House agreed to begin the formal inquiry.

On Oct. 31, the House of Representatives formalized the start of the impeachment inquiry into President Donald Trump with a vote of 232-196.

Although this may seem terrible for Trump, which it is, the Republicans have advantages in this situation. Stunning political pundits, not one Republicana voted for H.Res. 660, the resolution formalizing the impeachment inquiry. This is pretty stunning because Republicans have been calling the inquiry an ‘illegitimate process’ without a vote formalizing the inquiry, but when the Democrats finally agree to hold the vote, they criticize it.

This means Republicans are very unified on protecting the leader of their party. The unification of the GOP is great news for the President! Even if a few Republicans voted for H.Res. 660, especially Republicans in Democrat-leaning and swing districts, it could have caused a rippling effect throughout many Republicans in Congress to rethink their opinions on the impeachment inquiry.

But in the end, Democrats are getting what many have been asking for for a long time — a clear road to the impeachment of the President of the United States.

The time to impeach Trump has been well overdue. Ever since Special Counsel Robert Mueller’s investigation into Russian interference in the 2016 election with ties to Trump associates and Russian officials, reasons to impeach the president have been outlined and are clearly shown.in his 448-page report.

Robert Mueller outlined 10 instances of obstruction of justice by Trump in the report.

Some obstructions include efforts to remove the Special Counsel, to restrict the investigation, to prevent public disclosure of evidence, to have then-Attorney General Jeff Sessions take control of the investigation, ordering White House Counsel to lie about his attempt to fire Mueller and the praisings of former Trump campaign manager Paul Manafort, former national security advisor Michael Flynn and Trump’s former lawyer Michael Cohen in order to limit their cooperation with prosecutors.

And yet, despite the long, strenuous process of what Trump continuously calls a ‘Witch Hunt,’ he hasn’t learned his lesson and is still committing crimes and misdemeanors.

In a newly released transcript of a call made by Trump to Ukranian President Volodymyr Zelensky on July 25, Trump asked Zelensky to do him a favor after mysteriously withholding military aid to them, which had already been approved by Congress.

This is a huge deal.

Despite Republicans saying there was no quid pro quo, Trump issued one, as clearly shown in the transcripts.

“We are almost ready to buy more Javelins from the United States for defense purposes.” Zelensky said during the call

The Ukrainian President was detailing what he was planning to use the military aid for once acquired. But Trump’s response is what really made this ordeal a bombshell, and thus, the start of the impeachment inquiry.

Crowdstrike is a computer server and cybersecurity service that the Democratic National Committee used to investigate hacks against it in 2016. The reason Trump wanted Ukraine to meet his demands was because he doesn’t believe his own intelligence communities and rather believes that Russia was framed for the hacks of the DNC.

This is proof that Trump withheld the military aid as a way to give Ukraine a reason to meet his demands. Even Trump’s Acting Chief of Staff Mick Mulvaney admitted in a televised news conference that there was a quid pro quo and actually told the American people to ‘get over it’.

The president of the United States simply cannot do this. He cannot withhold military aid approved by Congress so he can pressure foreign countries into investigating his political rivals.

This is wrong. This is impeachable.

Additionally, Trump, on national television, asked China to investigate the Bidens. He seems to believe he can get away with anything at this point. And unfortunately, in a way, he has been.

Impeachment is one of the best ways to hold Donald Trump accountable and not let him get away with the crimes and misdemeanors he’s committed while in the Oval Office.

In Article 1, Section 9, Clause 8 of the Constitution, it states that any sitting president cannot profit off of the presidency. That’s exactly what this president’s been doing.

Any constitutional law broken by a president gives a reason for impeachment.

Trump, breaking constitutional law, is profiting from his various properties from the presidency.

For example, news broke in the summer about Air Force crews staying at Trump’s resort in Scotland for days at a time.

Also, whenever he vacations to his resort — which is a lot — government agencies pay Trump properties for lodging of those who work for the government and secret service agents. Various world leaders have also stayed at Trump resorts, such as Japanese Prime Minister Shinzo Abe.

The president was also planning to host the 2020 G7 summit, a gathering of the seven top world leaders, at his Doral resort in Florida. Thankfully, Trump retracted this idea after major pushback from both sides of the aisle.

Whether or not you agree that Trump committed impeachable offenses, he truly is one of the most unethical and immoral presidents in modern day history.

The president constantly tweets about how the press is the ‘enemy of the people’ and has pushed conspiracy theories and retweeted well-known bigots and white supremacists such as Jayda Fransen, an ex-British politician, and Jack Posobiec, an alt-right conspiracy theorist.

He called neo-Nazis ‘very fine people’ after their horrific, anti-Semitic march in Charlottesville, Va. He has called Mexicans — my people — rapists and criminals.

Trump had an affair with Stormy Daniels (real name Stephanie Clifford) while Melania Trump, the First Lady, was pregnant with their son, Barron.

He continuously attacks prominent women, lots of times because of their physical appearance.

“What does she weigh? 60 pounds?” Trump said about Justice Ruth Badger Ginsburg.

“Look at that face! Would anyone vote for that? Can you imagine that, the face of our next president?” Trump said about 2016 presidential candidate Carly Florina.

He calls Elizabeth Warren ‘Pocahontas’ because of her alleged Native American ancestry, which is extremely racist. He called Rosie O’Donnell ‘a slob’ and continued with “How does she even get on television?… I’d look right in that fat, ugly face of hers and say ‘Rosie, you’re fired.’”

What does his unethicalities and immoralities have to do with impeachment, you may ask?

As Sen. Lindsey Graham (R-SC) wonderfully said during his speech in 1999 about his push to impeach former president Bill Clinton: “You don’t even have to be convicted of a crime to lose your job in this constitutional republic if this body determines that your conduct as a public official is clearly out of bounds in your role. Impeachment is not about punishment. Impeachment is about cleansing the office. Impeachment is about restoring honor and integrity to the office.”