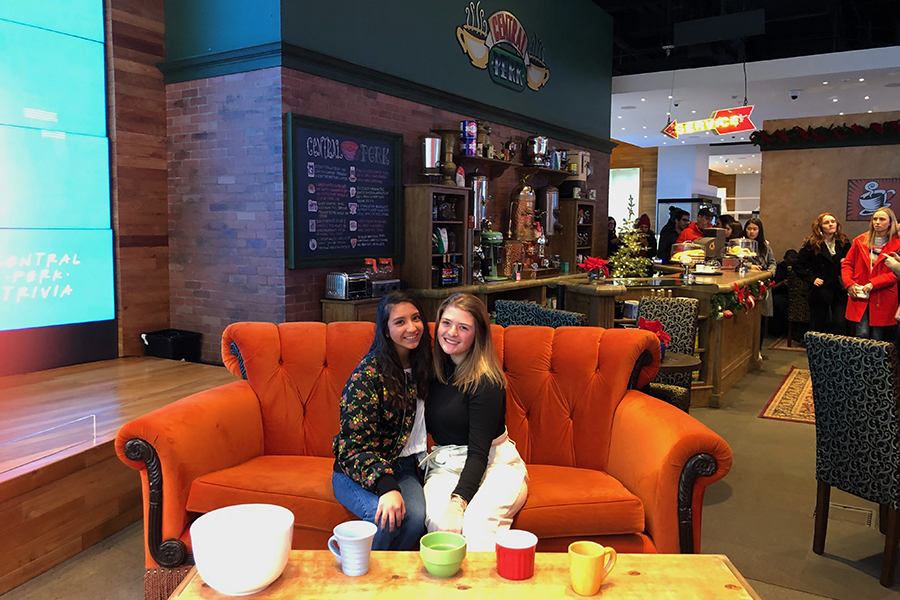 A life-size replica of Central Perk is set up in the AT&T Flagship Store. The pop-up shop was celebrating the 25th anniversary of the popular sitcom “Friends.”

On Saturday, Dec. 7, a friend and I took a trip to Chicago and got the chance to visit a “Friends” pop-up shop located at the AT&T Flagship Store on Michigan Ave. The pop-up shop was celebrating the 25th anniversary of the popular sitcom. The celebration included a life-size replica of Central Perk, a “Friends” boutique and a watch lounge to catch up on some interviews and favorite episodes.

There are many cool photo opportunities that could be taken here, such as the well-known purple door from Monica’s apartment, or you could even hold a guitar pretending to be Phoebe singing in Central Perk. But the best photo that I took here was when I got to sit on the iconic orange couch acting like we were really in the show!

Throughout the pop-up shop there were also real props and costumes put on display that were on loan from the Warner Brother Archives. Some of these items included Phoebe’s burnt dollhouse toys, a picture of Rachel’s Sonogram and the tight black leather pants that Ross wore in season five.

There were also a few interactive things that you could do, such as taking trivia quizzes or learning some fun facts about the show. You could also read the entire script of the first episode, but my favorite thing that I got to do was record my own rendition of “Smelly Cat” in a recording booth.

The pop up shop opened in late September, but as of now the closing date is unknown, so make sure you go and check it if you have the chance! It really is something not worth missing!