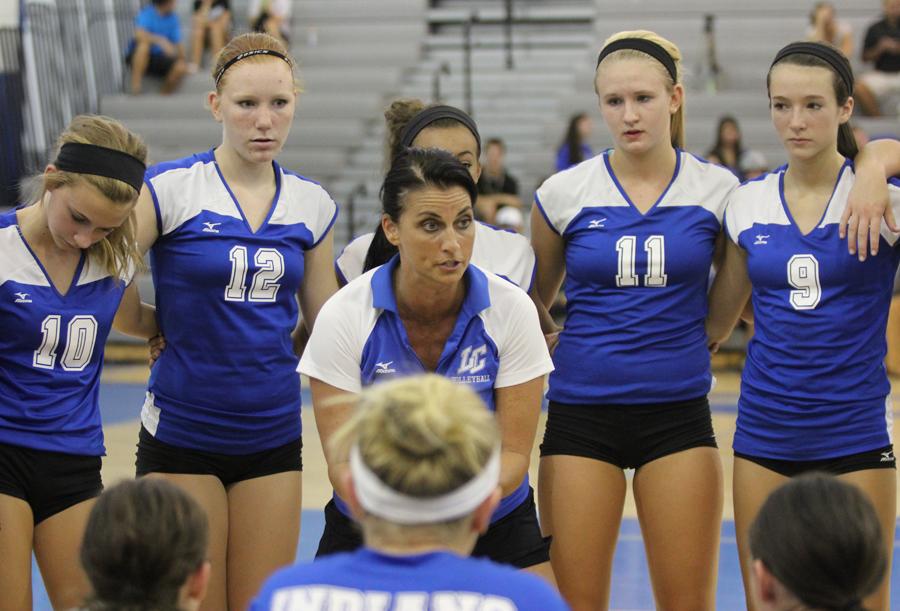 Varsity volleyball players Taylor Matushek (12), Maddie Hirschfield (9), Megan Malestetinic (11), and Brooke Renner (10) listen to Coach Tina Tinberg as she encourages the team during a timeout. The team lost their game to Crown Point on Tuesday, August 28 in the Lake Central gymnasium.

After five close sets on Tuesday, Aug. 28, the Girls’ Varsity Volleyball team lost their match to Crown Point in the LC gym. The two teams were very evenly matched, making it an exciting night for everyone attending.

“We played amazing and never gave up no matter what the situation was,” Nicole Garza (12) said.

In their first best-of-five match this year, Crown Point’s Varsity team won the first two games, and LC came back and won the next two. After fighting for the win, LC lost 12-15 in the fifth and final game. The overall score was Crown Point: 3 and LC: 2.

Crown Point, although not a big rival of LC, is a team all the girls would like to beat next time.

“I think we need to execute a little more in every position and finish strong,” Garza said.

The team will work on these things Thursday, Aug. 30 when they play at home against Portage High School at 5:30 p.m.