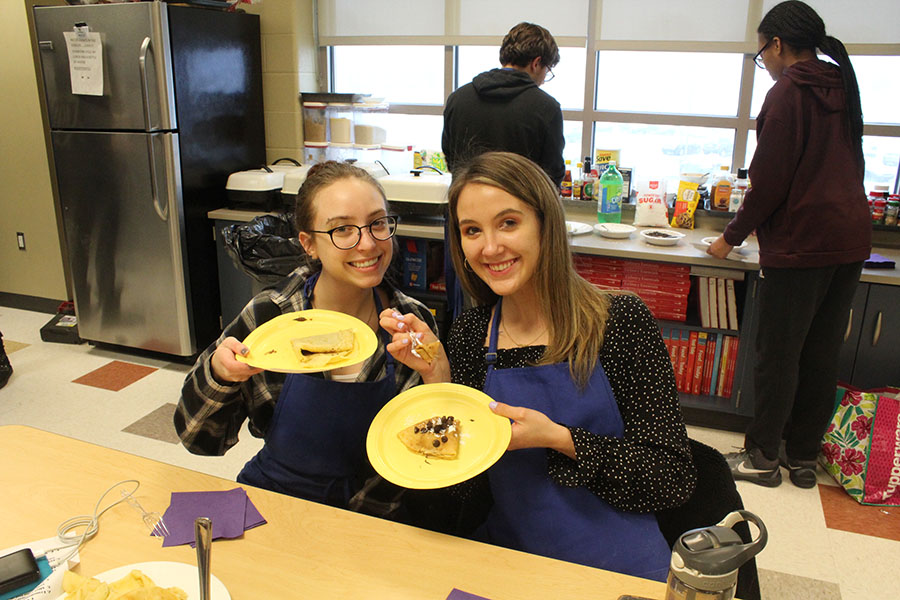 Claire Bandstra (12) and Allison Centanni (12) pose with their finished crepes. The girls were the first to finish making the desserts.

French Club met on Tuesday, Feb. 25 to celebrate Mardi Gras, a traditional French holiday, by making crepes. Members of the club met in the cooking classroom to learn the recipe and try making the traditional French dessert themselves.

“We had all of our students from [French] one to four come up to the Family and Consumer Science room and make crepes. It’s Mardi Gras, and Mardi Gras is typically associated with crepes,” Ms. Beverly Bovard, World Language, said.

Many students who don’t usually come to French Club attended this particular meeting in order to learn more about Mardi Gras and have fun while doing it. The students were given free range of the Family and Consumer Science classroom as they made their desserts.

“It was fun. It’s Mardi Gras, and a French tradition is eating a lot of crepes. I liked eating the crepes. It would be fun if we made French food more often,” Amanda Willy (11) said.

While many students were new to cooking this traditional French dish, some made crepes before. Sydney Gibson (11) has made the dessert for her French class on multiple occasions.

“I guess I just like standing in front of the stove and watching the food cook and eating. It’s a cool process. I make food occasionally. This is my third time making crepes,” Gibson said.

Mrs. Blandine Baldwin, World Language, and Bovard encourage students to attend all of the meetings. They believe it is beneficial to learn more about the culture and history of France.

“It widens their experiences. It’s not just grammar and reading. We do some things that bring in the culture. I think it’s important because it’s a way for us to connect to the other culture, because we find some traditions and celebrations and other things like that. It gets them into something outside of their immediate community,” Bovard said.