#BlackLivesMatter in the Lake Central Community 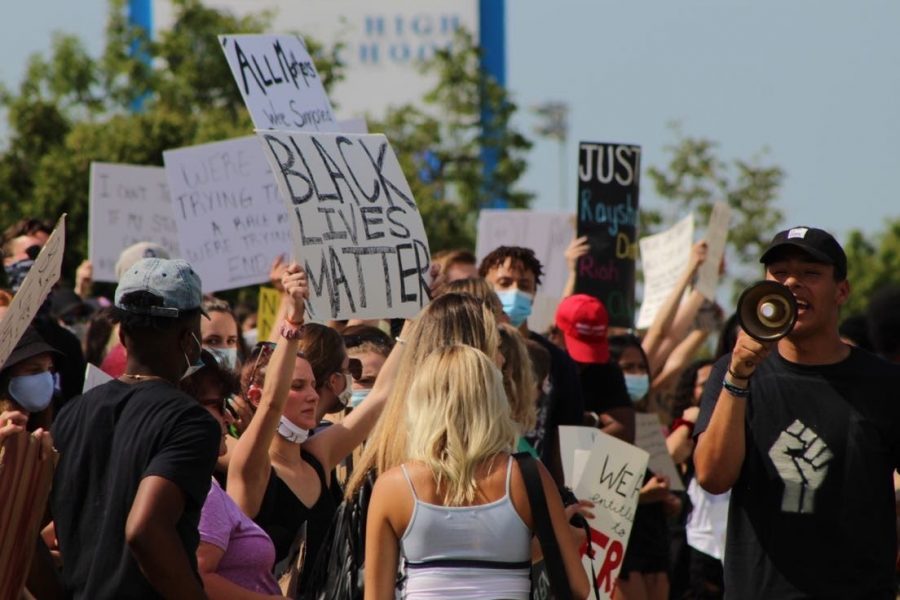 Mateo Cedano (‘20) leads a protest held at the school following the death of George Floyd. The event took place on Thursday, June 16, and had approximately 300 attendees. Photo by Brian Scott

On Thursday, May 25, George Floyd was murdered by former Minneapolis police officer, Derek Chauvin. The force in which Chauvin used on Floyd outraged many individuals throughout the nation, and even the world. Floyd’s death reignited Black Lives Matter, a movement that advocates against racial injustice and police brutality. This also prompted students to organize a protest for the Lake Central community to voice their opinions on school grounds. The protest took place on June 16, and approximately 300 students, faculty members and others attended. One of the organizers, Michaela Spears (‘20), took initiative to use this opportunity in order to speak about the movement and spread awareness.

“I was scared to publicly speak about my experiences of racism and racism in general, especially to an attentive crowd of all ethnicities. That’s something that doesn’t happen often at all. Usually, when speaking about experiences of racism they are brushed away, belittled and ignorantly accepted as a part of life. Saying my emotions aloud and sharing my stories to a listening crowd that’s demanding change was a new feeling. I think a lot of people at the open mic also felt those same emotions: fearful at first, empowered in the end. Because the population of Saint John is majority white, many have never/rarely experienced racism or discrimination; therefore they can easily ignore the issues of racism, discrimination, police brutality and systemic racism if they aren’t directly affected or exposed to the severity of these issues,” Spears said.

During the protest, attendees had the option to voice their opinions and feelings during open mic. Many took the opportunity to share their personal experiences with racism throughout their lives and within the school district.

“The last time I experienced racism at LC was in 8th grade at Kahler. I was in computer class, when somebody called me a ‘ni**er.’ It made me feel really upset and angry because I had just moved to that school. We all should be treated the same way no matter the circumstances we are under. Parents should further educate their kids about race and names given to them by racist actions. They should make sure their kids know what words to use and what words not to. Treat others how you want to be treated, and they will do the same,” E’lon Johnson (11) said.

One of the main ways many students feel the school can take action is by altering the curriculum of social studies courses. Kortni Minter (11) feels educating students on the culture and history of all races is key to being aware of the racial issues within the country.

“I do not believe our curriculum is white-washed; however, I believe it is leaving out important parts of history that make the country what it is today. It doesn’t go into much detail about black history as it would white history. It is not just our curriculum that is organized this way, but many other educational programs as well. I think it is very important for students to understand black culture as well as all the others. Although African American rights and history [are] being presented because of current racial injustice, it is important for us to not to forget about other cultures, languages and histories,” Minter said.

One of the main obstacles many minority students face in the world of public education is the lack of representation in their school’s faculty. The absence of a teacher, for example, that is of similar race or cultural background can make it difficult for students to connect with the material that is taught in the classroom environment. Students, such as Suha Issa (12), may feel that this can hinder them from excelling in their educational career.

“I think that our school can improve on having more minority faculty members by representing more people of color. Having a teacher that a minority student can really connect with is something so important to me. [It] is what makes [minority] students comfortable with educators. It’s not about what’s in the books, it’s the way that the teachers go forth about teaching it, and that’s the way that a teacher can really impact a student’s education,” Issa said.

To many people of color, the support from their white peers is vital during the fight against racial injustice. Erin Pistello (10) believes that in order to be a true ally, it is vital to stay educated on the topic as a whole and take action by promoting anti-racism, whether that be at home or publicly.

“I have the privilege of not having to worry about being hurt or killed by police if I stand up to them because of my race. My voice is protected by the color of my skin. I’d say that being an ally at this time is just being anti-racist and standing up for what’s right, more importantly checking your privilege and realizing and ending racially biased habits. People can stay informed by listening to black voices, doing research on the injustice in the criminal justice system and even reading into racial issues on social media. TikTok and Instagram are useful tools to see firsthand experiences and share information online,” Pistello said.

The younger generations, specifically “Generation Z,” have been heavily associated with the indulgence of social media. It is an accessible tool that many teenagers use to help promote awareness of many social issues while simultaneously reaching a larger audience.  Hamza Abughofah (‘20) decided to use the popular social media platform Twitter to help bring awareness to the Chicago Community Bail Fund, currently utilized to assist those arrested at protests, specifically in Chicago and the surrounding area.

“I’ve long understood the need for change within our justice system as a whole, but often saw that people didn’t really understand it. With the murder of George Floyd, I felt like a lot of people finally understood it and felt helpless, so I decided to use my tweets as a way for people to interact in real-time with ways to help. A simple retweet was enough for a donation on their behalf, and I funded it knowing that these small acts of change could keep the momentum going for others who may feel like they’re finally contributing through my tweets. Many people almost lionize a social media presence, and seem to think that a constant presence for the cause is necessary by all. The truth is, we can’t expect everybody to be on the same page. There are many people out there who are still uncertain of how to feel, who may have turned a corner but are not strong enough or convinced enough to be loud. We can’t antagonize people for not over sharing because change comes in a variety of avenues, with the goal of changing the perception of the whole and moving the conversation forward. So maybe these people who aren’t necessarily posting all the time are doing other things. Maybe they’re having the tough conversations at the dinner table or with friends, or are internalizing all the information and forming an opinion. All these things do just as much, if not more at times, in regards to shifting the perception of the nation and moving the conversation forward,” Abughofah said.

In addition to utilizing social media, some students at Lake Central will be able to vote in the upcoming presidential election, thus voicing their opinions with their vote. Considering the candidates and participating in the election also gives students and others a chance to make a positive change. Kayla Longfield (12) explains that one vote can make a difference and even help advance the Black Lives Matter movement.

“I think a lot of people from the younger generations especially have been more active in trying to educate themselves and others on systemic racism in the United States. I believe that the responses of the presidential candidates to the Black Lives Matter movement will help influence the election to some degree. I personally can’t vote in this election, but I still think that voting is an important aspect of our democracy. One vote could make the difference between your district’s representatives choosing one candidate over another. Don’t go into the election blind. Look into the candidates beforehand and review their character, beliefs and policies. Also, look to see how each candidate has reacted to the Black Lives Matter movement,” Longfield said.