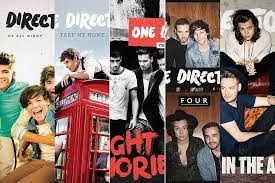 One Direction’s sold albums included Up All Night, Take Me Home, Midnight Memories, Four and Made in the A.M. They sold one album per year between 2011 and 2015.

The world-famous British-Irish boyband One Direction celebrated their 10-year anniversary on July 23, 2020.  In the months leading up to July, the band members had been hinting at a possible reunion.

“I wanted them to get back together because it reminded me of my childhood when I would obsess over all of them.  It was nice to think they would be reuniting and I could feel that familiarity in my life through their music,” Ella Dobrovits (10) said.

Hearts were broken when it was announced that the band would not be reuniting.

“I would just want them to be friends again,” Ava Moreno (10) said

One Direction formed in 2010 after performing on the UK reality show “The X-Factor.”  Between 2010 and 2014, the boys released four studio albums and an additional one following member Zayn Malik’s departure in March of 2015.

“All of their songs, even if they are slow, have a unique energy that is hard to find with other artists,” Dobrovits said.

In 2012, their song “What Makes You Beautiful” was number one on the Billboard Hot 100 chart.

“One word I would use to describe their songs is inspiring because they work so good as a band,” Bailee Carroll (10) said.

Harry Styles, Niall Horan, Louis Tomlinson, Liam Payne and Zayn Malik had the hearts of young listeners in their hands.

“When I was younger it was definitely Liam [I liked the most], but now I’d have to say Niall because he is so funny and I love following him on social media,” Dobrovits said.