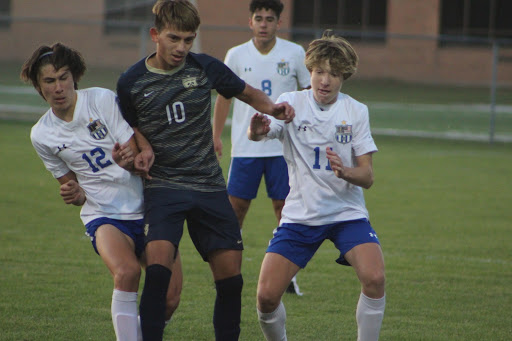 Miller Knestrict(9) and Jake Noldin (11) fight for the ball against a Bishop Noll player. The Indians won this game with a score of 4-3. Photo taken by Tiffanie Richerme.

Anxious feelings and unknowingness flooded the Varsity boys soccer team during school on Thursday, Oct. 8. After defeating Bishop Noll in their intense post season opener on Tuesday, Oct. 6, the boys remained unsure of whether or not they would move on to the next round due to a fight during the first five minutes of the second half against Bishop Noll. One player from each team received a red card which meant that no matter which team won, the player on the winning team would be forced to sit out of the sectional semi-final game. Little did the boys soccer team know that these would not be the only repercussions they faced.

“When I saw our players getting into a shoving match and throwing punches, I immediately knew there were going to be consequences, and I tried to break up the fight as soon as possible,” Ben Puch (11) said.

Despite getting involved in a “shoving match,” the boys soccer team continued to play with heart and came out on top, winning the game with a score of 4-3. Excitement ran high after this major win, but was quickly turned to disappointment after hearing that there was a chance of not even moving on.

The boys were ready for their punishment, but they were not ready to give up on the season. The game scheduled for Wednesday, Oct. 7, was rescheduled for Thursday, Oct. 8, in order to give the IHSAA time to review the game and decide the team’s fate. At 2:09 p.m., it was announced that all varsity soccer players were to report for a meeting in which their game was confirmed. The excitement ran rampant throughout the room, but once again was quickly overturned by the announcement that not one, but three of the starting eleven players would be unable to play in the sectional semi-finals. Other teams may have been worried missing three key players, but the team was confident that they could come out on top regardless.

“Going into the game without three of our eleven starters was definitely tough on the team, but everyone had the same next-man-up mindset. We know everyone on the team is talented and we all showed that,” Ryan Mauder (11) said.

The team knew it was imperative to win this game not for themselves, but for the other boys who had to sit out during this semi-final. Every position mattered and every player worked to fill the gaps left by the missing players.

“I knew that even as one of the younger players that I needed to step up and take more of a leadership role and just play a bigger part and try to fill in some of those gaps,” Miller Knestrict (9) said.

The first goal was headed into the goal by Morton within five of the first forty minutes of the game. This 1-0 score did not phase the Indians as they stayed strong and worked hard. Ryan Mauder (11) was able to tie up the game with his first goal of the night and the half ended with a tied score of 1-1. This score did not last for long. Soon into the second half, Morton gained two goals both off of penalty kicks due to fouls in the box. As the score deficit increased to 3-1, morale on the field stayed high, which allowed them to increase the score to 3-2 with only four minutes remaining in the second half.

“The second goal felt even better because after that with four minutes left in the game I knew we had a good chance at tying the game and maybe even winning,” Ryan Mauder (11) said.

Because they were only down by one goal, the coaches urged the boys to keep their heads up and demanded that this was not going to be the end for the team.

“Coach Shane and Coach Eric kept telling us to keep our heads up, and that is exactly what we did. We kept believing, never gave up, and we fought until the last whistle,” Knestrict said.

“It was such a great feeling scoring with 40 seconds left. Honestly, I have little memory of the goal, it was just a reaction. I felt so thrilled that I had to go celebrate obnoxiously,” Egnatz said.

Defense was the main goal of the players for the last forty seconds of the game. Only one thing was going through their mind: Don’t let Morton score. They successfully completed this goal and moved into two seven minute halves for overtime. Using the momentum from this crazy comeback, the boys came out with intensity. With only 10 seconds left, the score was still 3-3. Michael Miljevic (9) gained possession of the ball around the 20 yard line and kicked up a hail mary near the goal. The ball was headed into the goal by Knestrict right as the clock struck zero.

“It felt great to have that winning goal in overtime. It was awesome to get to celebrate with my teammates after, and I knew it could mean a lot for our team,” Knestrict said.

The coaches and teammates ran onto the field to surround Knestrict after he scored the goal. While the excitement was hard to contain, the game was not over yet. Once again, the team played defensively in order to keep Morton from scoring and, once again, they were successful. The team was excited and proud of everyone that just played, but they were most excited that their teammates who were unable to play in the semi-finals would have the opportunity to be on the field again.

“When I heard they were losing 3-1, though, I started getting nervous. Then eventually when I get the news they somehow came back and won 4-3, I wasn’t surprised, but at the same time, I couldn’t believe they came back last second like that. I was so happy that they won, and I’m excited to get to play another game,” Mathew Schwer (12) said.

The sectional finals will take place at Highland on Saturday, Oct. 10 at 7 p.m. Come see the boys finish off their sectional journey as they hope to gain a sectional title!