Tension on the field: Boys Varsity soccer secures a win at sectionals 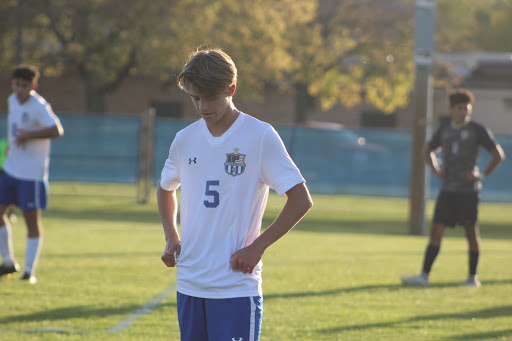 Sam Egnatz (11) takes a breath after a goal was made. Lake Central had just scored against Bishop Noll.

Fans sat on the edge of their seats, eager to see how the last twenty minutes of the Varsity boys soccer sectionals would unfold. After a physical confrontation between players from Lake Central and Bishop Noll only ten minutes earlier, the atmosphere was tense as Bishop Noll scored another goal, making Lake Central only one point ahead. Cheers echoed back and forth for each team, and at the conclusion of the second forty minutes, Lake Central came out on top with a score of 4-3.

“I thought as a group we played phenomenal. Everyone had each other’s backs. Every ball that needed battling, we battled for it. All the tactics our coaches drew up in the classroom we perfected. The game got a little bit out of our hands with the fight, but we learned from it and know that is not how LC wants to be remembered, but we capitalized on our chances and came out with the win,” Emilio Zambrano (12) said.

Although the first half of the game ensued without issue, coaches and players alike stormed the field as the boys engaged in a fight ten minutes into the second half. After consulting with the referees, a few players from either side were suspended.

“We have a few suspensions for the fight, but we don’t know what IHSAA will do,” Tre Adams (11) said.

Despite this negative standout moment, there were multiple positive moments the players remarked upon. Both Adams and Zambrano agree that the first goal of the game was the top memorable moment.

“One moment that stood out for me the most had to be when we all celebrated together on the sideline after Miller Knestrict (9) scored the first goal to put us ahead. It shows how we are family,” Zambrano

This moment was particularly appreciated by Adams, as he had been looking forward to sectionals all season. Securing the win after all the tension both on and off the field only made the game better in his eyes.

“My thought [going into the game] was to win no matter what cost. The game went good. We played amazing and won. We’ve been preparing for sectionals the whole season. It felt good [playing sectionals] because tournament games are exciting,” Adams said.

Although a few players were suspended, the IHSAA has allowed Lake Central to continue their season. The boys are trying to look past the fight and continue winning sectionals games.

“The will and fight from both teams and not wanting to go home early [contributed to the game]. Sectionals were exciting. All games in the postseason are going to be intense and competitive, but we’re ready for it. [I hope to] win every game that comes our way with my team,” Zambrano said.