The start of art 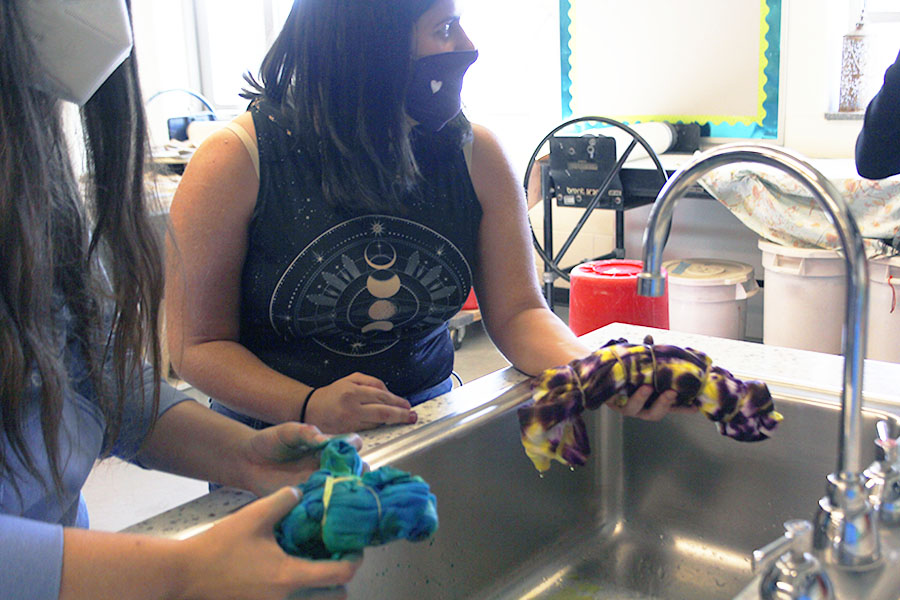 Some students sit on the floor due to the lack of seats. There were over 30 kids at the meeting, so the club planned on moving to the cafeteria for their next meeting to make more space.

Splotches of colorful dye covered the art room during the first Art Club meeting on October 7. Mrs. Britney Spencer, Art, started the club off with a tie dyeing activity. Each student was asked to bring a white t-shirt and a $5 club fee to get the year going.

This is Mrs. Spencer’s first year not only as the club sponsor, but at the school as well. Preparing for the club had its drawbacks due to the virus, but Mrs. Spencer hopes to make changes for the unexpectedly large number of students that decided to join the club.

“I had discussed the possibility of limiting the number of students allowed to be involved thanks to Covid, but I felt it was unfair to exclude them simply because there wasn’t space to spread out. I am hoping that I can use the cafeteria going forward. This will ensure I can safely allow all students to participate,” Mrs. Spencer said.

At the meeting, the students went to different stations with different colors of dyes to decorate their shirts. Afterwards, the club talked about more ideas for future activities. Moving forward, the club plans to delve into other forms of art, like painting, sculpting and even digital art.

“Honestly, I’m looking forward to working with different people and mediums of art. I wanted to join the club because it’s great to be exposed to new people, environments and tools to work with,” Brooke Batema (10) said.

The art club has been a small club for students to express themselves and explore various art forms, but the club and its new sponsor are looking to expand its horizons. Mrs. Spencer plans on extending the purposes of the club that will benefit the members more in the future.

“My long term goal for the club is to morph it into a  National Art Honors Society. Not only does this allow these individuals to still come together in a safe and comfortable setting, but it will give them tremendous scholarship o