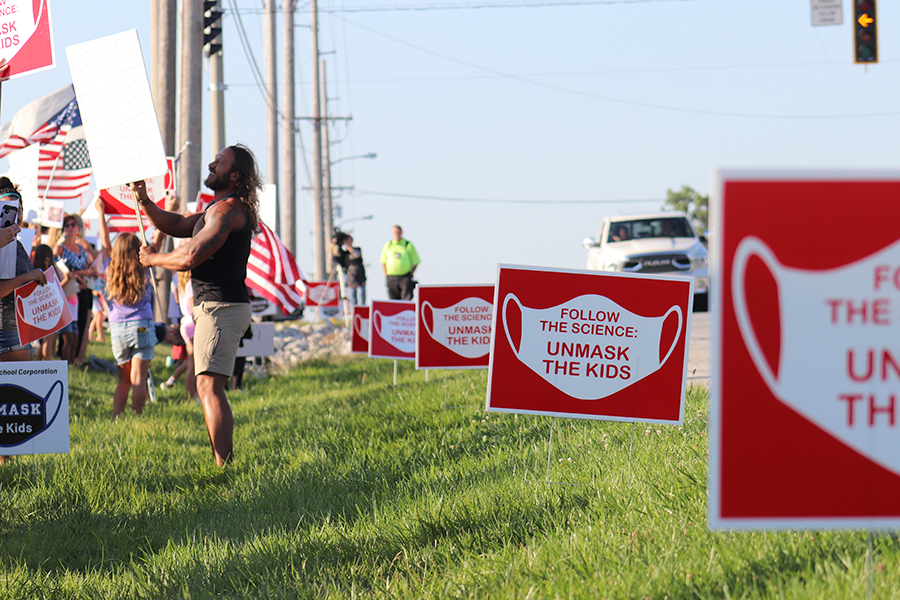 On Aug. 16, 2021, a large group of parents, students and community members protested against the school’s mandate of masks. The protesters were gathered along US Route 41, inciting mixed reactions from passing traffic.

On Monday, Aug. 16, students, parents and people of the community gathered in front of Lake Central High School at 5 p.m. to protest the mask mandate for students and staff.

“We are protesting because we need to get the masks optional because masks don’t work,” Jacob Warn (12) said.

Traffic on U.S. Route 41 had mixed responses to the crowd of protesters. Kailey Chicki, senior at Crown Point High School, said she was pleased with the traffic’s reactions. The appearance of students from other schools, as well as the involvement of local news stations, reflects how the attention gained by the protesters is being noticed by those outside of the school district.

“Crown Point school is having optional masks as of now, but I feel like there’s a good chance that they are going to change it because they changed it [at Lake Central,] and I don’t want that to happen. [The people driving by] have definitely been more positive than negative, and I really appreciate that from everybody,” Chicki said.

A variety of signs and flags were displayed from the crowd. Signs and flags that said: “Stop the abuse, unmask children,” “Honk 4 Smiles” and “Joe Biden sucks” were common. Lisa, a parent who preferred to keep their last name anonymous, had a bedazzled sign that read: “LC Supports Communism.”

“If you want to wear a mask, wear one. If you don’t, don’t. You can’t force things, it’s supposed to be a freedom of choice. [The school board doesn’t] care about us, they don’t care about the kids,” Lisa said.

Group chants projected from the crowd like: “No more masks,” and “Fire Veracco,” erupted throughout the protest. One common message was directed towards Superintendent Dr. Larry Veracco, which suggested that his actions have caused frustration among parents, students and members of the community. Specifically from Schererville, Gary Miller expressed his resentment.

“The people who are enforcing these mandates and enforcing the vaccines are evil. Pure evil. They don’t care that it harms the kids. It’s important to take a step back and look at the overall argument behind it,” Miller said.

As 7 p.m. approached, the protesters marched into the auditorium to attend the school board meeting.