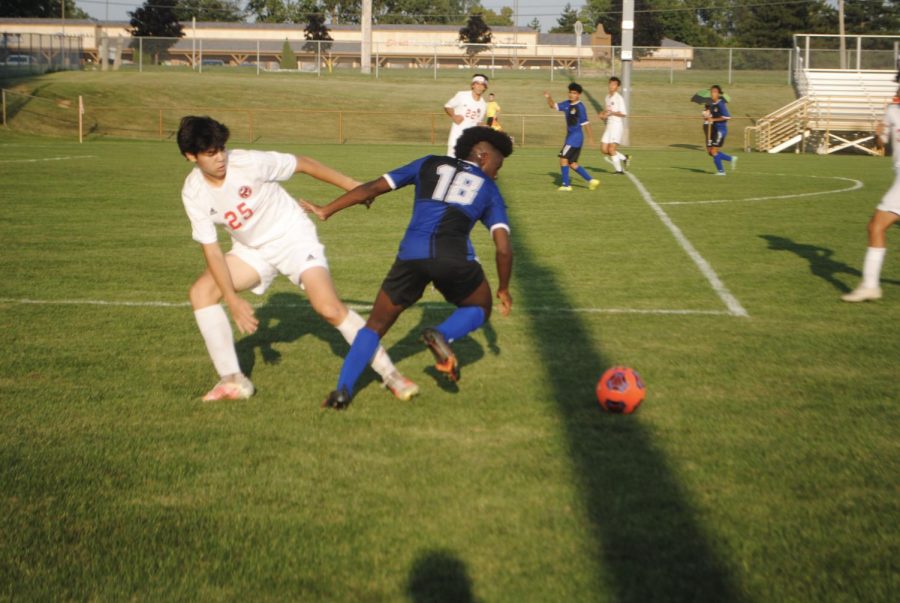 David Reed (10), cuts a defender and passes for a great opportunity for the team. The opportunity was missed but the boys played on with this same aggressiveness throughout the game.

The boys JV soccer team had a hard fought game against Munster High School on Monday.  The game was even throughout the first half going scoreless with tough defense being played by both teams before scoring two quick goals to seal the game away.

“I just got done telling them, great teams find a way to win even when they’re bad, and we were bad today.  I think the other team showed a little more ambition for the game, I thought that they pressed a little bit higher, a little bit faster at times.  I thought that our soccer and our tactical abilities started showing through and we won in the end.  But it was a game that I really wasn’t proud of, I thought that our effort could have been better.” Coach Jeremy Rainwater, Career Technology Education, said.

“You really see them play with confidence after that first goal, they looked more like themselves after they found the first one.  I think that they’re a young team, and as the game went deeper and deeper they started to panic a little bit,” Rainwater said.

With this game the team has a new found confidence and stacked training schedule.  With a long season ahead of them, Coach is ready to push the team hard through the season.

With the long season ahead of them, the team will have a lot of training and games.