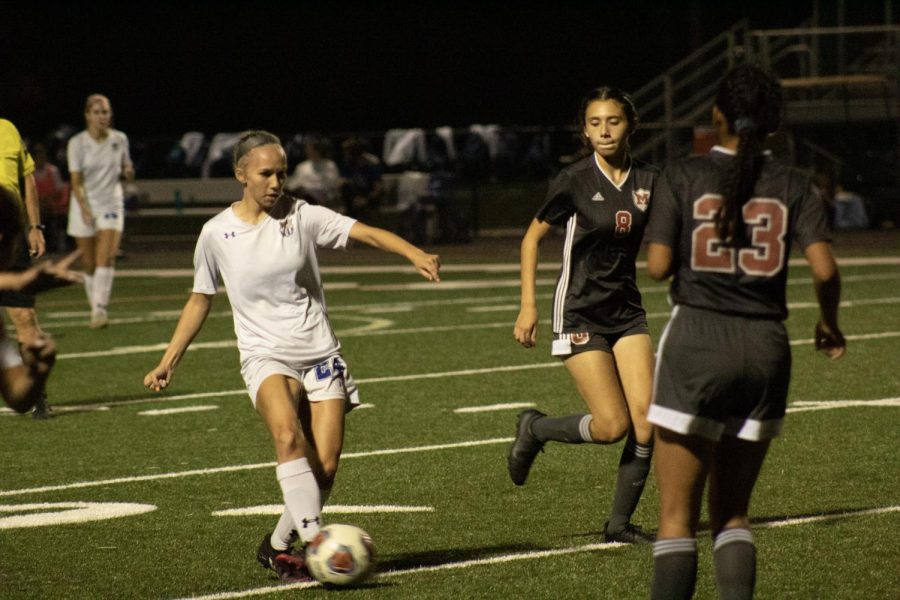 Maggie Fudacz (12) passes the ball to her teammate through the opposing team. She got the ball through with little effort.

On Oct. 6, the girls Varsity soccer faced Morton Highschool at Munster for their first sectionals game.  Defense keeps their guard up strong for when offense takes their shots. Emma Ruzycki (11) is on offense and told her perspective of scoring goals in games.

“I play forward and I like being in the attack because defense does a lot for us. [But] When we score it’s just that nice, fun feeling of adrenaline and it’s just a good feeling to score sometimes,” Ruzycki said.

While there were missed goals, that doesn’t change how well the girls played. Six different girls played their best and got the opportunity to get a goal with the help of their teammates. Layla Doreski (11) scored three out of the nine goals.

“The only thing I would have fixed is to sit out the second half to conserve my energy. We had our next sectionals game the day after,” Doreski said.

At halftime, the girls were already winning 7-0. After that, some girls were constantly switched in and out of the game allowing their teammates chances to play, and for some to rest.

“The morale of the team was positive because we all wanted to do our best to prepare for the game against crown point,” Mia Nisle said.

This game was a preparation for their other games for the sectionals. They defeated Morton 9-0 making them eligible for the next sectional game.

“I think that the girls came out strong. I think that they came out ready to play not only today but they are preparing for games tomorrow and hopefully on Saturday,” Coach Genna Noel (teaches for Bibich elementary) said.