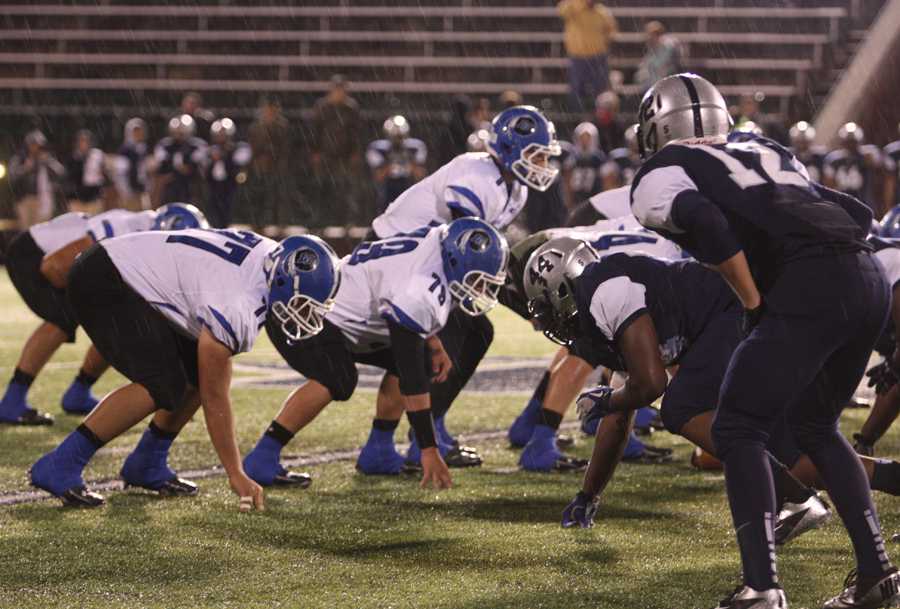 Indians line up to charge down the field with another offensive play. With this play, the boys managed to move the ball a few yards.

LC varsity football had a promising start to their 2012 season, until they lost Friday night to Michigan City, giving them a 5-1 record.

The Wolves took the lead at the end of the first quarter with a score of 7-0. The Indians came right back with a touchdown pass to Jake Turngren (11) and a completed kick by Timothy Ritchie (12).

Michigan City responded to the tied score with another touchdown, leaving the halftime score at 14-7.

The Indians picked it up during the second half, adding six points to the scoreboard during the third quarter. LC completed a field goal, putting them two points ahead to start the fourth quarter.

At the beginning of the fourth quarter, the wolves scored again putting them back in the lead with a score of 20-16.

With minutes left in the quarter, the Indians attempted to make a comeback. Quarterback Alec Olund (11), moved the team up the field swiftly, but threw an interception to end the game.

“This loss will make us practice twice as hard, and now we know not to overlook any team,” Milos Losic (12) said.

Michigan City faced LC with a 1-4 record and were not favored to win. This DAC loss was tough for the Indians; however, the players plan on coming back stronger.

“When you win, nothing hurts, but taking our first loss hurt us really bad, and we never want that feeling again,” David Yancey (12) said.

The Indians will face Chesterton in week seven of the 2012 season; fans and players are anxious for the game’s outcome taking into account Chesterton’s undefeated year.

“I’m not sure what the future holds for LC football, but I do know who holds the future,” Lucas Taylor (12) said.