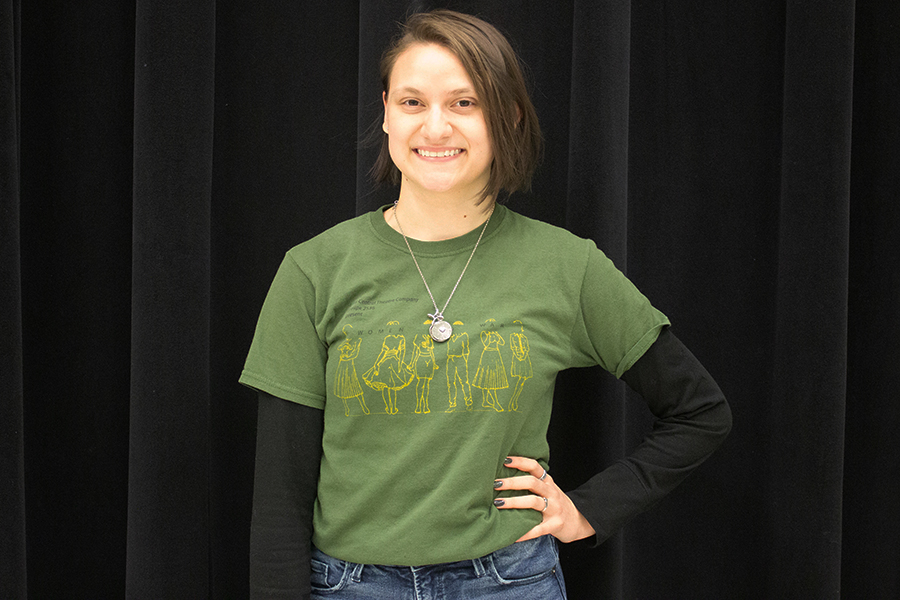 With her hand on hip, Chloe Baisa (12) poses in the choir room. She started her fine arts career when she was young.

Q: What are Freshman Shows?

A: Freshmen shows are shows that are directed by upperclassmen and acted in by freshmen, [and] we also try to get as many freshmen techies to participate as possible.

Q: How are directors decided for Freshman Shows?

A: In order to direct freshmen shows, we have to turn in a portfolio for our show explaining what our directors vision is, [like] potential costuming, blocking, characterization, sets, props, lighting and sound design. We basically put together the show on paper so whoever is picking the show can see where we want to take it.

Q: What kind of preparation goes into this on your end?

A: I am putting together my show along with my fellow directors Seneca Howell (12) and Sophia Perkovich (12). We work together to design all of the tech elements (lights, sound, props, set, costumes) for the show as well as talk about characterization and block the whole show.

Q: What has been your favorite part about the preparation?

A: My favorite part of prepping the show on our part as directors is definitely blocking. I am a very hands-on director, so when we’re blocking the show I am up walking around and showing ideas physically. This often causes a lot of laughter because of my ridiculous motions. My favorite part of prepping the show with our actors is probably the second and third rehearsals when lines are already learned and the actors can just have fun with their roles. It’s super fun seeing what they come up with and being able to piggyback off of that.

Q: If you can share, what is your show about this year?

A: This year our show is called Escape Room. It is about a softball team trapped in an escape room for a team building exercise. There is a love connection, a burning hatred, a fear of birds and a lot of chaos along the way.

Q: What has been your favorite memory from being involved with Freshman Shows?

A: My favorite memory of freshmen shows so far is probably from the show I directed with Seneca last year. We had a little get together with our cast before the show as a last hoorah, and we played a game called catch phrase. To make a long story short, someone on my team did not hear me screaming the correct answer at them which caused us to lose the game and I was just extremely upset. Looking back, it was hilarious. We all had a lot of fun and referenced it multiple times the rest of the time we had with the show.

Q: Did participating in Freshman Shows your freshman year help you be a better director?

A: I honestly don’t think participating in freshmen shows when I was a freshmen has helped me in my directing experience, well, maybe a little. Every show and every actor is different, so you never know what kind of teaching you’ll have to do as a director until you meet your actors and get them on their roles. So I feel like being in shows in general has helped me as a director, but not specifically my freshmen show from my freshmen year.

Q: Do you have any advice for someone aspiring to become a director?

A: If you want to be a director, you need to show that you’re responsible and care about what you do. Directing is a huge undertaking, but if you are willing to put in the work needed to make a good show, it is so worth it. But I would also say, just have fun with it. Be willing to work with your actors and mess around at rehearsals because that’s when the real memories will be made.