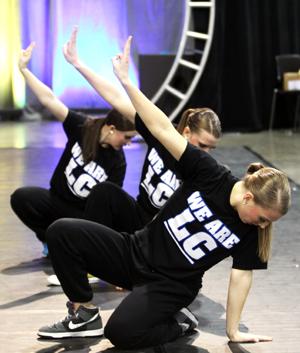 Michelle Gentz (11), Tari Markowski (11), and Amanda Roberts (10) put up the symbol that represents District 12 in the movie The Hunger Games. The girls finished their Hunger Games-based Hip-Hop dance strong.

On Saturday, Dec. 1, the Centralettes traveled to their second competition of the season in Milwaukee, Wisconsin. After a long bus ride, both teams prepared to perform their jazz dances.

“We’re expected to do good in jazz. That’s why we work so hard and are dedicated to what we do,” Danielle Soucie (10) said.

After jazz was done, there was no time to relax. Both teams rushed to get dressed and warmed up for their Hip-Hop dances.

“It’s very tricky to switch from jazz to Hip-Hop in a short amount of time. You have to mentally prepare yourself as well as physically prepare your body,” Celine Tucker (11) said.

When it came time to perform, the girls gave it their all and were very energetic. Both dances seemed to be crowd pleasers.

When awards came around, everyone circled up and waited to hear the results. Both JV and varsity received first place in their jazz and hip-hop categories. JV was also awarded most over-all crowd appeal for their hip-hop performance.

This weekend on Saturday Dec. 8, the Centralettes will travel to Indianapolis to compete.