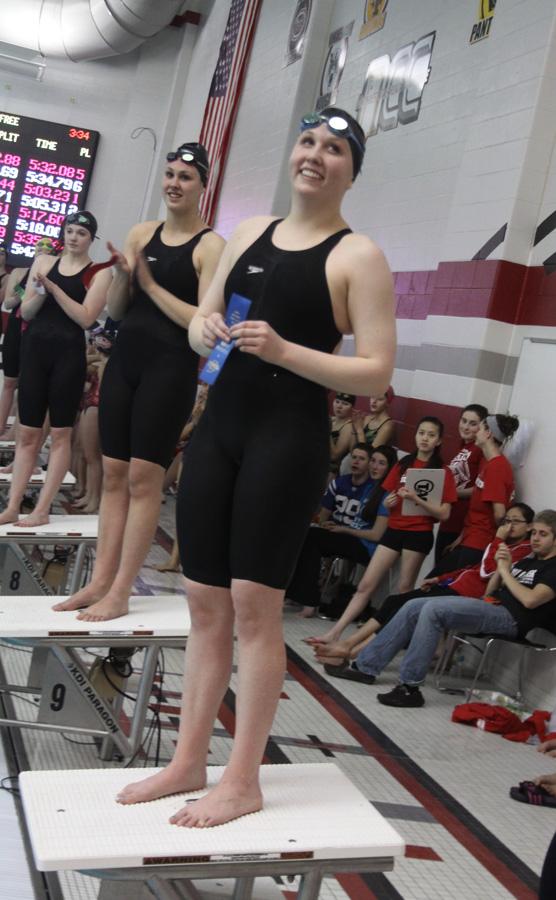 Tracilyn Muszalski (11) gets first in her event at girls varsity sectionals. She was swimming the 200 freestyle.

The varsity girls swim team had sectionals on Saturday February 2. Schools from all around the area competed against each other in a series of events.

“Going into the meet, we knew nothing was going to be given to us. The second halves of our meets are usually our strongest, so we knew our first half needed to be stronger than usual. The medley relay got us started,” Tracilyn Muszalski (11) said.

Throughout the day, the girls from Lake Central and Munster High School were neck to neck competing for 1st and 2nd place overall.

“We were ahead a lot of the time, but after the breaststroke we fell behind.”

Both individually and as a team, the girls placed very well and their determination paid off.

“Our state team this year is a lot bigger than it’s been in the past because we have all three relays going down and 8 individual swims. Last year we had two relays and two individual swims,” Alaina Willis (12) said.

Two of the swimmers to get state cut times this year were freshman. Marina Vasquez (9) was seated to get sixth in her event and placed second to go to state. Expectations obviously aren’t much compared to the hard work the girls have put in.

“We had two relays in front of Munster which we didn’t expect to get. There were a lot of people that moved up spots they were supposed to,” Willis said.

By the end of the day, Munster did pull ahead of Lake Central by only two points for first place overall.

“Everyone really swam their best. A lot of girls are going to state, but it is disappointing coming up two points short from Munster,” Willis said.

The girls set the bar high every time they get into the pool, and they went home with both new pool and sectionals records to be proud of.