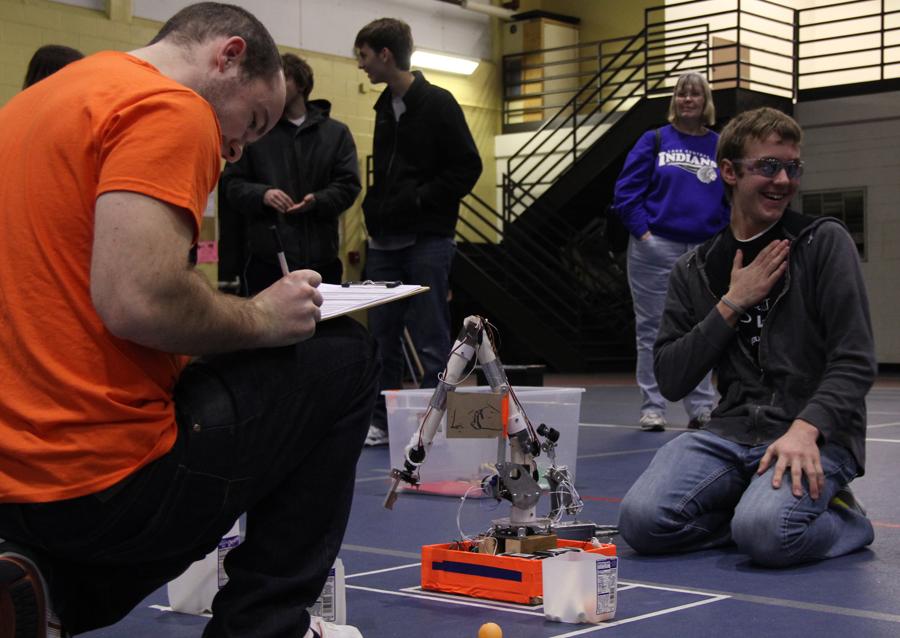 Daniel Shanks (12) takes a sigh of relief after finishing his event ‘robot arm.’ Shanks took first in this event at the St. Joseph’s Regional.

On Feb. 9, Science Olympiad members sat around anxiously in the auditorium of St. Joseph’s College, watching a picture slideshow while listening to and belting out Queen’s “We are the Champions” awaiting the start of the awards ceremony.

“My goal was to come in first in all my events, get first in Forensics and really show the other schools that we could do a lot even with the seniors who left, and to make it to State,” Robert Belzeski (10) said.

Lake Central took fourth place, trailing the third place team, Peru High School, by a mere three points. Initially, only the top three schools were to advance to State; however, with new rules in place, the top four would be eligible to move on in the competition.

“I wanted to at least get first in Astronomy, but I took second to Munster who was first [in the event] at State last year. I think we could have honestly done better, but it still went pretty well as we made it to State,” Brandon Kozel (11) said.

The past two years, Lake Central had taken first at their Regional; however, no team had placed first three years in a row, and the team’s competition was not about to let that happen. Munster High School, who Lake Central lost to at a State level, moved into the Regional and swept the competition taking the title of first. Lake Central is the only team that ranks in the top 10 at State that does not have a Science Olympiad class.

“There’s a couple of events I plan on working harder on and working with some of the alumni. I’m going to fix up Astronomy and work on Circuits. I think we need to all focus on build event ideas and maybe get a group conceptualizing thing down,” Kozel said.

State competition will be held at Indiana University Bloomington on March 16.