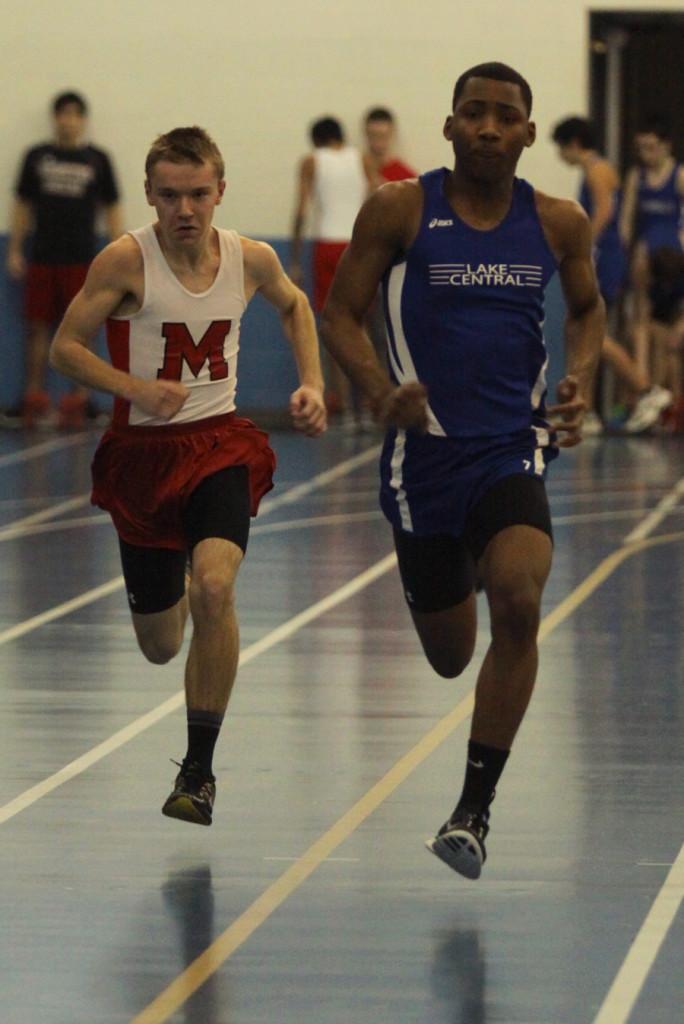 Brady Cooper Jr. (11) sprints down the indoor track at Lake Central. Cooper kept up with Munster for most of the race, but lost in the end.

The Boys Track team competed in their first meet of the season against Munster on March 8. The Indians were able to beat out the Mustangs in many events for a win overall, although it was a non-scoring meet.

“I thought we did pretty well as a team. Some people surprised the team with their performance,” Matthew Spanier (12) said.

The meet was held indoors at Lake Central, because the outdoor track has been completely demolished due to the construction of the new building. The indoor setting was different from what many athletes were used to.

“Because the air is so dry inside, it really burns your throat especially if you’re in a distance event, so I prefer running outdoor over indoor. I never fell before, but I fell on the indoor track because it was too crowded and more slippery than the outdoor track,” Spanier said.

Although the track and environment were abnormal for many runners and jumpers, they were able to overcome the obstacles and win their first meet. The meet was not scored, but Lake Central was expected to win by 60 points.

“I thought it went well for our first meet, but there’s still more work to be done. I think this year we’ll be just as good as last year, if not better,” Justin Wippo (12) said.

The next boys track meet will be held at Lake Central on April 3, at 4:30 p.m. against Valparaiso.