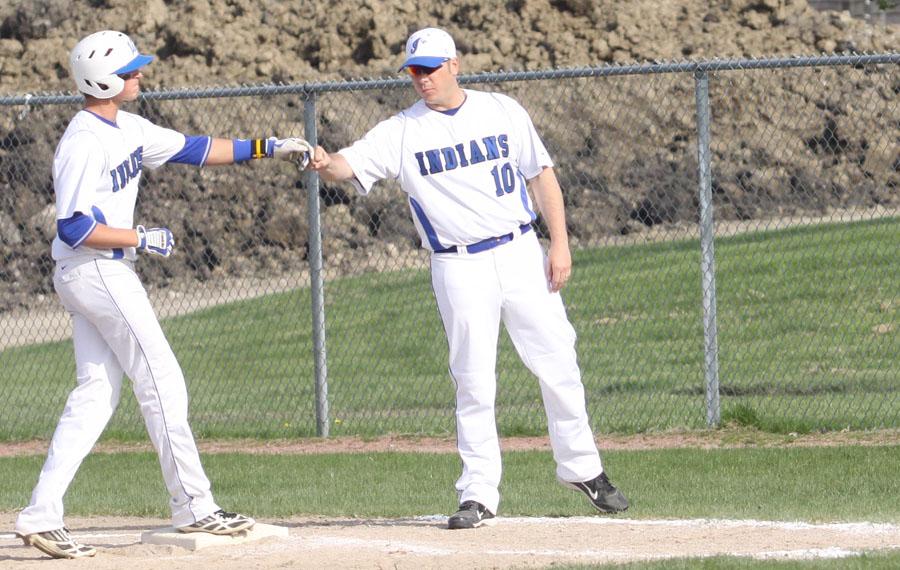 Coach Joe Stanisz fist-bumps Alec Olund (11) after Olund’s single. Olund went 2-for-3 with a walk in a 7-3 Crown Point victory on Monday, April 29.

When you’re up against a pair of heavyweights who throw 90 mph blows from both hands, striking back can be a challenge.

The Tribe responded to the haymakers.

“Both Ronnie [Plesac] and Zach [Plesac] are capable of being Major League players. Zach is a righty who has a very efficient fastball getting up to 95 miles per hour. Ronnie is a lefty who has powering, runny fastballs that tail off to righties and in on lefties,” Alec Olund (11) said.

Zach, who committed to Ball State, got the start for the Bulldogs. He threw over 130 pitches in six innings of work. Antonio Majstorov (12) was able to hunt down the future Cardinal.

“After striking out on three well-located curveballs, I went up my next at-bat with a lot of confidence looking to smoke one of his fastballs. That’s what I got and that’s what I hit,” Majstorov said.

“If we play them again, we’ll be ready. As a senior, I feel like me, [Olund], and [Nicholas] Kellams (12) have a lot of experience from the success we had last year and the pitchers we faced along the way. We’re trying to share that with everyone. We’ve really grown up a lot lately as a team,” Ryan Burvan (12) said.

The Tribe continues their quest for DAC supremacy today in Michigan City at 4:30 p.m.