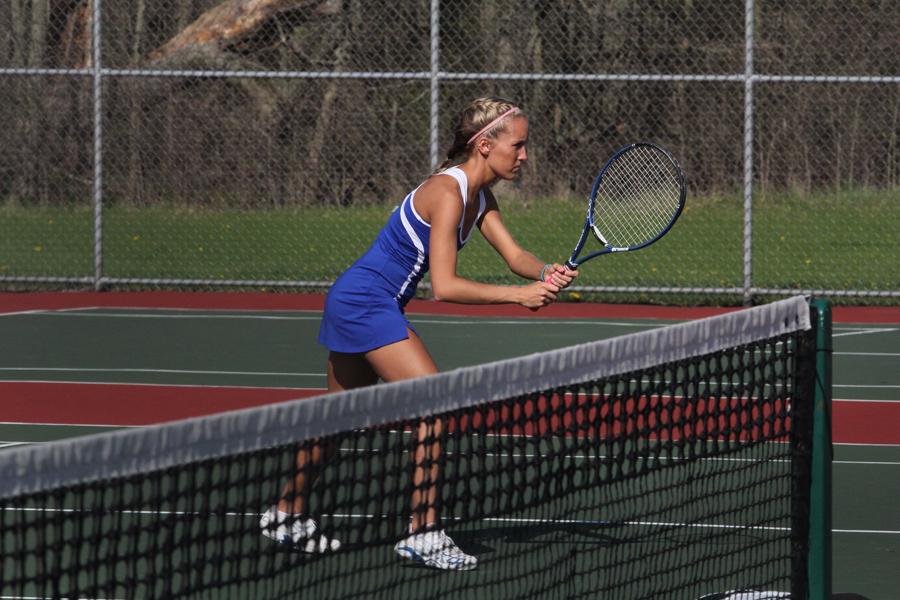 Nicole Stanek (12) prepares for the next rally. Playing at 2 doubles, Stanek and her partner, Emma Rogers (12), won their match, gaining a point for the final varsity score.

It was a blustery and humid afternoon on Tuesday, April 30 when the JV and varsity girls tennis teams competed against Chesterton High School. While varsity lost 4-1, JV tied 5-5.

“I think we played really well, and since me and Emma [Rogers (12)] are powerful hitters, that gave us an advantage over the team, and we both played aggressively and came out with a good win,” Nicole Stanek (12) said.

Amidst the stifling 85-degree weather, the girls stayed in control physically and mentally.

“It definitely made us more tired, but it also had an effect on the other team, so we took advantage of that and played our best through it,” Stanek said.

JV has remained undefeated so far this season, and the Chesterton match helped preserve their victory streak.

“It’s awesome because I don’t remember this ever happening before the whole time I’ve played tennis,” Sarah Dingman (10) said.

The next match will be this afternoon at 4:15 p.m. at LaPorte High School.