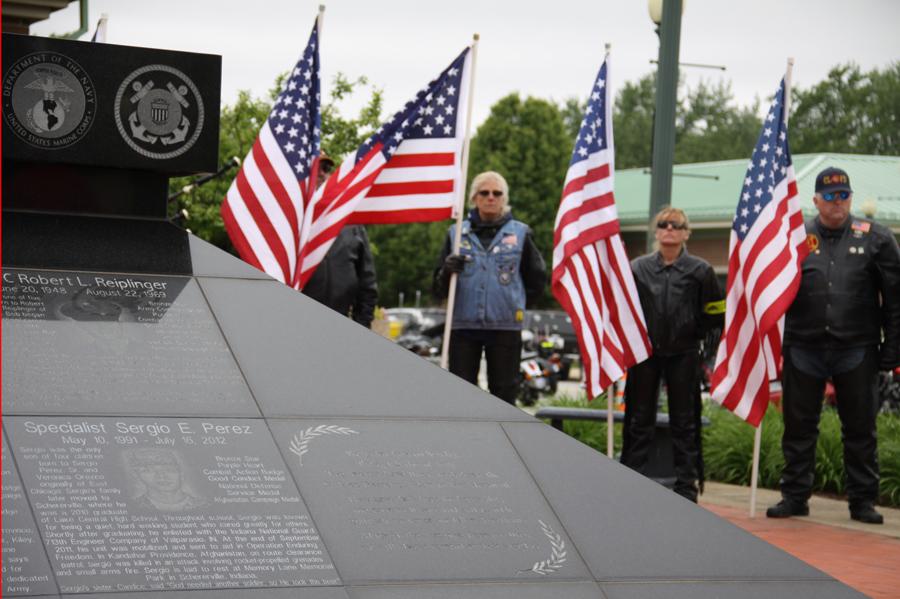 David Nowaczyk (’97) and Sergio Perez (’10) both have plaques dedicated to their service and love for their country. This memorial service occurred on June 2 at the Schererville Police Station.

“I am a member of the National Guard and I wanted to support a fallen soldier. It’s good that we get recognized [for achievements],” Brandon Cole (11) said.

Outside the police station, a black granite pyramid tells the stories of all Tri-Town soldiers who have been killed in action.

“I came because Mr. [Tom] Clark asked for volunteers so I wanted to help him out. [I also came because] I appreciate what the military does and I haven’t been to anything like [this memorial service]. [My favorite part was] the veiling of the new memorial spaces because that is what the ceremony was about. I’m glad I attended,” Ellinee Nelson (11) said.

The memorial committee, consisting of students, town hall workers and any other citizens who want to help, made this ceremony possible.

“After we heard of David’s death, Cindy Horgash, previous member of Schererville Parks and Recreation, started working on a memorial service. When we were in the process of fundraising, we heard that Sergio died in action as well. It took three months to raise the money. Schererville Parks and Recreation oversees the project once the memorial committee is finished [with their work],” Allison Jaroszewski (’02) said.