Preparing for Changes Ahead 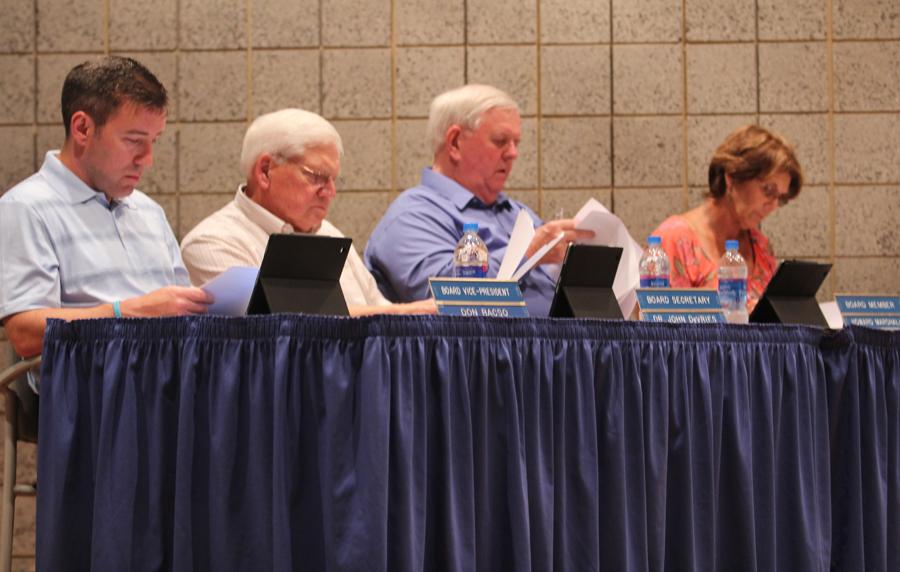 On June 17 a school board meeting was held in the LGI room, where members discussed topics from the recently finished school year and the 2013-2014 school year. The school corporation’s financing, construction of Lake Central and recognition to members of boys and girls track were some important topics covered.

One large point of discussion was fundraising, which played a major role this past school year and is currently helping significantly.

“Off of the Culver’s ice cream sale $5,369 was raised, which is really outstanding because that is one of our major fundraisers,” Ms. Janice Malchow, school board member, said.

“We don’t just fundraise. We give back to the community, we sponsor [the] tailgate which is done at the homecoming every year, we add the DJ, the food booths, supply tables for athletic teams to fundraise for their teams, as well as food drives,” Bereda said.

Bartolomeo recognized Gelen Robinson (12) as he broke the all-time Regional record and is now the school record holder in shot put and discus. At the state meet he placed second in both shot put and discus events. Katelyn Brown (‘13) was recognized for placing sixth at State for pole vault. Kaitlyn Moricz (‘13) was also recognized for placing 4th at state in pole vault and broke the all-time conference long jump record. She also holds the Lake Central all-time long jump record.

“We had two girls in one event place in the top ninth at All-State for pole vault, so we are very proud of that,” Mr. Bartolomeo said.

As far as construction updates, progress continues as the new school year gets closer.

“We have shut down the road as scheduled around Freshmen Center and around the new pool all the way around back to the Sesame Street gate. We will be doing site work, paving and sidewalks around that area from now until the end of July,” Bill Ledyard, Director of Facilities, said.

Many other improvements such as windows, drywall and paint for the school are also occurring.

The meeting wrapped up with final comments from the board members and appreciation toward the Booster Club.