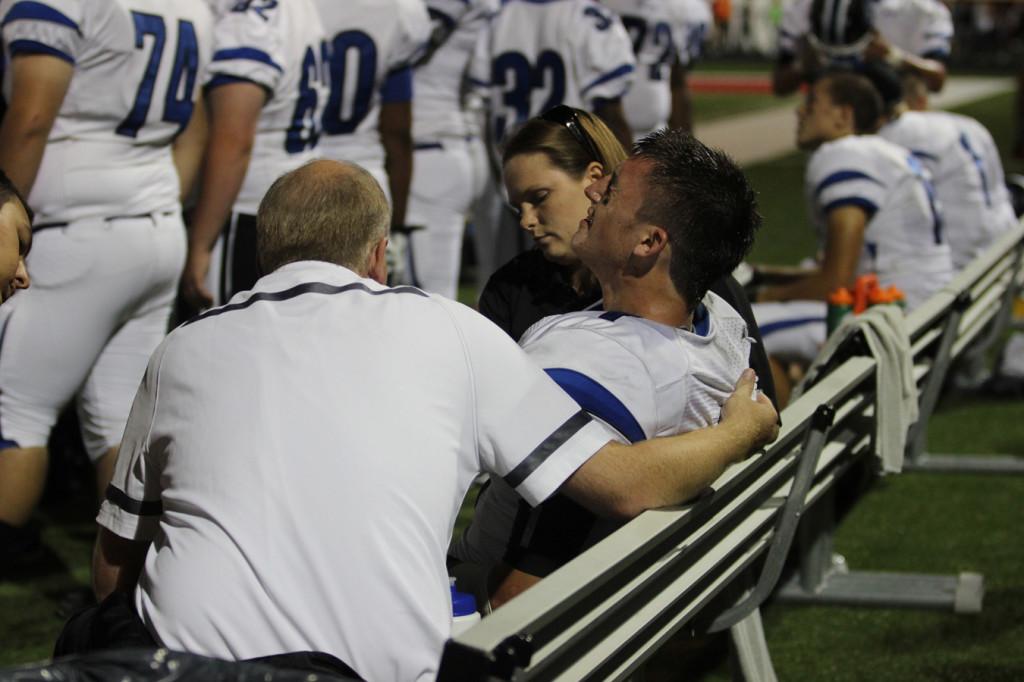 Alec Olund (12) winces in pain as two trainers look at the injury on his left hand. Olund broke his hand and knuckle, and the injury might cause him to miss the rest of the season.

The football team kicked off the season on Friday night in a game against Munster. The end score was 27-9 Munster, and not only did the Indians lose the game, they also lost a player.

“I was running the ball and I broke a tackle, but another guy came and hit my hand full-speed with his helmet. I ended up breaking my hand and knuckle. I’m probably done for the season,” Alec Olund (12) said.

With Olund’s injury, Colin Studer (10) is going to have to step up and take his spot.

“I hope Alec has a speedy recovery. I’m not worried. I’m just gonna use all the things Alec and Coach St. [Brett] Germain have taught me and use that to help the team win,” Studer said.

Toward the end of the second quarter, Antwan Davis (11) caught a touchdown pass, closing the gap between Munster and LC 14-6. Shortly thereafter, they kicked the PAT (point after touchdown) and missed. However, afterwards they made up for the missed PAT by scoring a kicked field goal which added the 3 points that got LC to 9.

“I thought we played well. I know the scoreboard didn’t show it, but in all reality, we beat ourselves. We had a lot of penalties that really hurt us. It was just one of those games where nothing went our way,” Olund said.

Though the team was losing and a player was injured, the crowd tried their best to keep the team pumped up in the hopes of a comeback.

“When the crowd is cheering us on, it keeps me going. When they stop cheering, I kind of lose hope,” Brian Rice (12) said.

The next varsity game is on Friday vs. East Chicago.