The rain before the rainbow 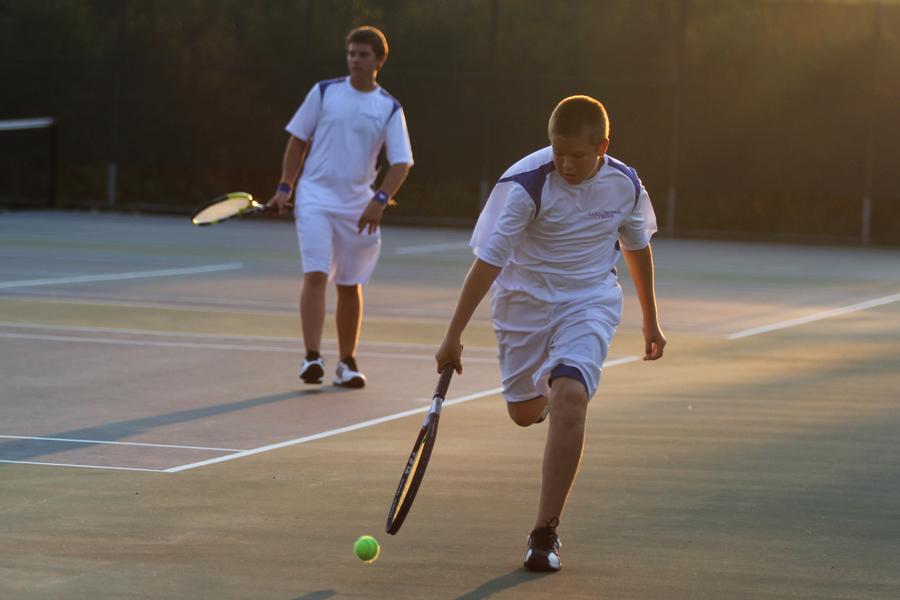 Nicholas Bradner (11) chases after a tennis ball during his match against Chesterton. Brandner and his doubles partner Brett Balicki (10) lost their match with a score of 6-2.

Staying cool on a day with temperatures nearing 100 degrees was not the only challenge that the boys tennis team had to face. They had a tennis match they needed to win.

“Chesterton is a very good team. They have had a lot of good teams over the years,” Head Coach David Cafmeyer said.

Captains Thomas Ruzga (12) and James Lafakis (11) used a quote in order to motivate their teammates for this match.

“I give them a quote before every match. Today I said, ‘You have to go through the rain to see the rainbow,’” Lafakis said.

Dusk and darkness quickly took over the tennis courts, which restricted the players’ view of the the ball and the court. A decision was made to postpone the match until the following day.

“I wanted the meet to end [the first night] because I had the momentum,” said Luke Oboy (12).

Oboy had to play the remainder of his varsity singles match on Wednesday, Sept. 11. Eric Shrader (12) and Keith Crawford (9), varsity doubles partners, would also finish their match the next day.

“We were not very nervous [about playing the second day] because we had a comfortable lead [from the night before]. Even if we gave up a few games, we could still come back,” Shrader said.

“It was a good feeling [to win] because the whole meet relied on our win,” Shrader said.

The boys overcame the heat, the extension of the meet and also some actual rain before they were able to see their rainbow of victory.

“It was a good team win,” Cafmeyer said. “I’m very proud of the team.”