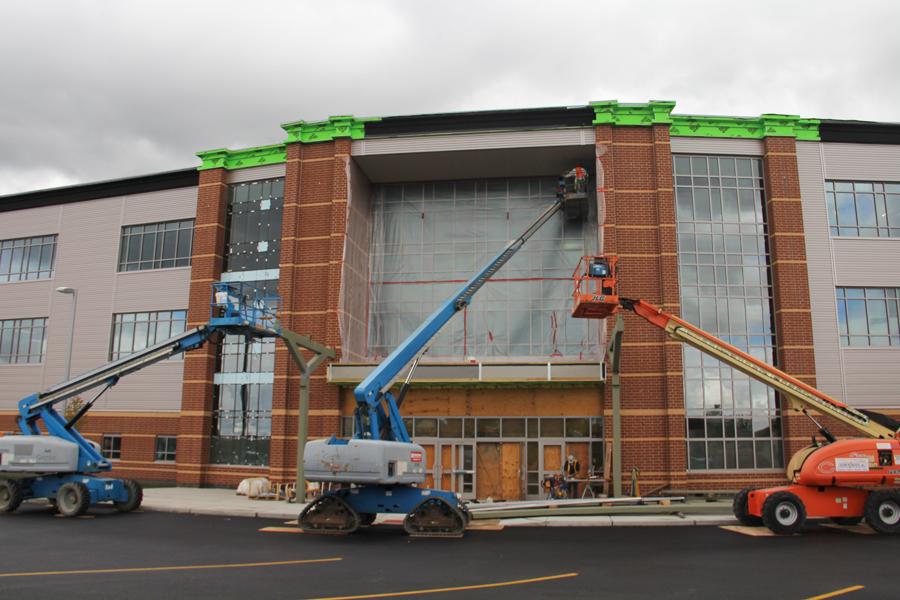 For over a year, the residents of the Tri-Town area have watched as the western part of Lake Central’s property has undergone a drastic transformation. Although the project will not be 100 percent done until 2015, huge milestones are before us.

By the end of November, construction of the three-story academic wing and new pool should be completed. In January, students will return from Winter Break to vacant A, V, E, C and S-Halls and will be relocated to the new building, fully stocked with adequate materials for the maximum learning experience Lake Central High School has to offer.

“After the referendum in 2011, we hired Schmidt Associates [Architecture Firm] out of Indianapolis. We met with the principal and department heads, so they had some input. They kind of told us what their needs were, so the architects and I kind of put it together,” Mr. Bill Ledyard, Director of Facilities, said.

Schmidt Associations is no amateur to the world of architecture. The company has designed multiple dorms and learning facilities at colleges such as Ball State University, Franklin College, Indiana University and Indiana State University. The firm also designed the NCAA Headquarters and Hall of Champions.

In their latest project, Lake Central, all they have to offer is being utilized. The classrooms are now going to be specified to their needs, not just four walls with some furniture. For example, each of the three floors will have four science labs, so experiments no longer have to be performed within the classroom. Art rooms will have new features to improve the art program, as well as the Family and Consumer Sciences rooms. Business classrooms will also have separate sub-rooms to resemble meeting places in the real world. For more detailed classroom plans, check out the concepts blog, which can be found here.

On the other side of the property, the pool is nearing completion. Multiple stress tests have been conducted to ensure the strength of the 750,000-gallon, Olympic-size pool. If construction continues as planned, pool classes and the swimming teams may be able to practice in the new pool before Winter Break. According to Mr. Ledyard, the pool should be finished by Thanksgiving.

“The project is progressing on schedule. The first phase should be turned over around Thanksgiving construction-wise. In December, [we’ll have] furniture and technology,” Mr. Ledyard said.

Assuming all goes as planned, the academic building and pool will be in full use by January. The whole project, including a new media center, auditorium, music wing and athletic facilities will be completed in 2015.