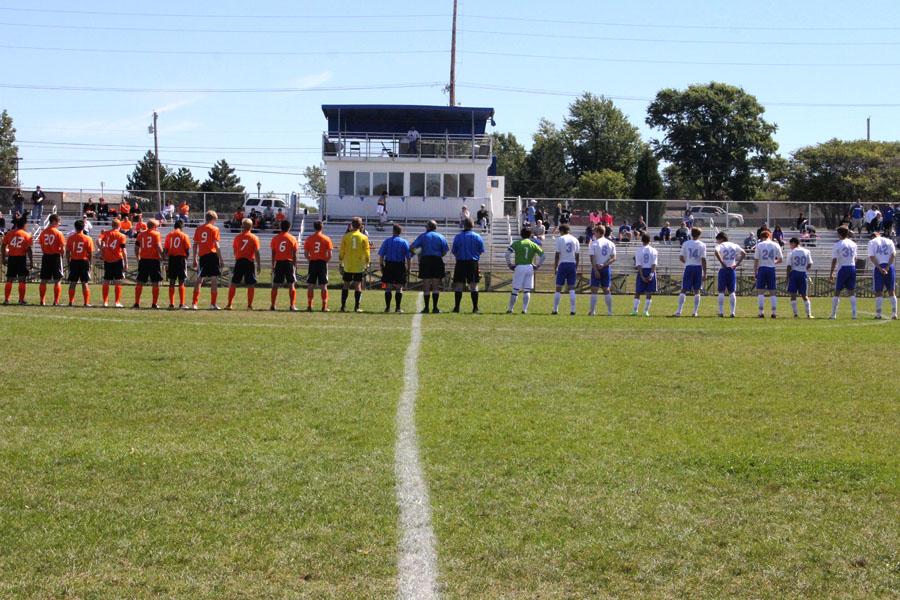 The LaPorte Slicers (left) and the Lake Central Indians (right) stand together in the starting lineup before Saturday’s game. It was a close game, with two regulation overtime periods and a penalty shootout, but LC won 4-1 in penalties.

On Sept.14, LaPorte came to St. John to take on the varsity boys soccer team for the first Duneland Athletic Conference game of the year. It was a close game that went into overtime and a penalty shootout, but the boys won in penalties 4-1.

The scoreboard remained 0-0 at the end of the second half. Consequently, the boys went into two seven-minute periods of regulation overtime.

Kyle Kil (11) made the first goal of the night when he scored during the first regulation overtime period; fans cheered and players ran to high-five and congratulate their teammate.

“[Making the goal] was exciting because after the entire game, we finally scored in overtime. We played pretty well and were able to hold them,” Kil said.

Mirroring the first overtime period, LaPorte scored a goal during the second one. Regulation overtime ended with a score of 1-1, so the boys battled it out in a penalty shootout. LC came out on top with a score of 4-1.

“[Winning a DAC game] was a great feeling because we have sort of been in a drought, and to win our first DAC game felt great and relieved some of the stress off our shoulders,” Trevor Clapman (12) said.

The next varsity boys soccer game takes on Chesterton and will be held this coming Wednesday, Sept. 18, at home.