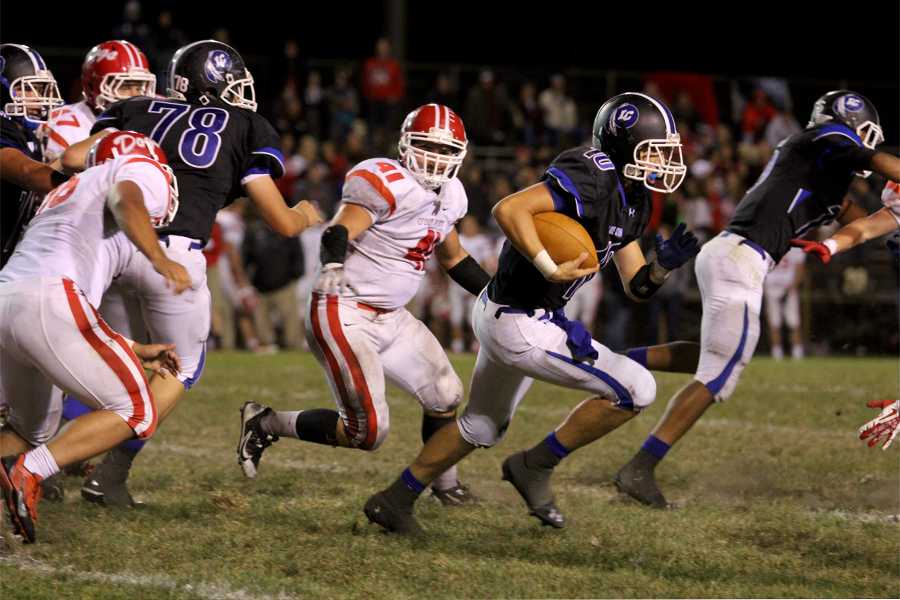 Colin Studer (10) runs the ball down the field in a breakaway. Studer has had to step up the past few weeks as quarterback to replace Alec Olund (12), who is injured.

The Indians were victorious over the Crown Point Bulldogs in their home game on Friday, Sept. 13 with a final score of 23-0.

“[This win was] really important because we have a lot of first-time starters, and this win gave them confidence, which we didn’t have before this game,” Jake Turngren (12) said.

Colin Studer (10) has had to step in for injured quarterback Alec Olund (12) in the past few games. Although he feels the pressure from his team, he is working to overcome the challenges being a young quarterback presents.

“A lot of the challenges I have are facing good DAC defenses and my own nerves,” Studer said.

The Indians offensively took control of the game, not allowing the Bulldogs to get in their end zone.

“I think we did really good, especially compared to how we played our first three games. [Crown Point] was the best team we’ve played [so] far,” Turngren said.

With the starters being so young, Turngren feels that he and the other returning starters need to step up.

“I think me and some of the other returning starters need to work on being better leaders because of all the inexperienced players we have,” Turngren said.

Studer acknowledges the fact that he still needs to work on a few things for the season.

“[I need to work on] my lower body throwing mechanics, but I really need to improve everything about my game,” Studer said.

The Indians face the LaPorte Slicers on Friday, Sept. 20 at 7 p.m. at LaPorte High School.