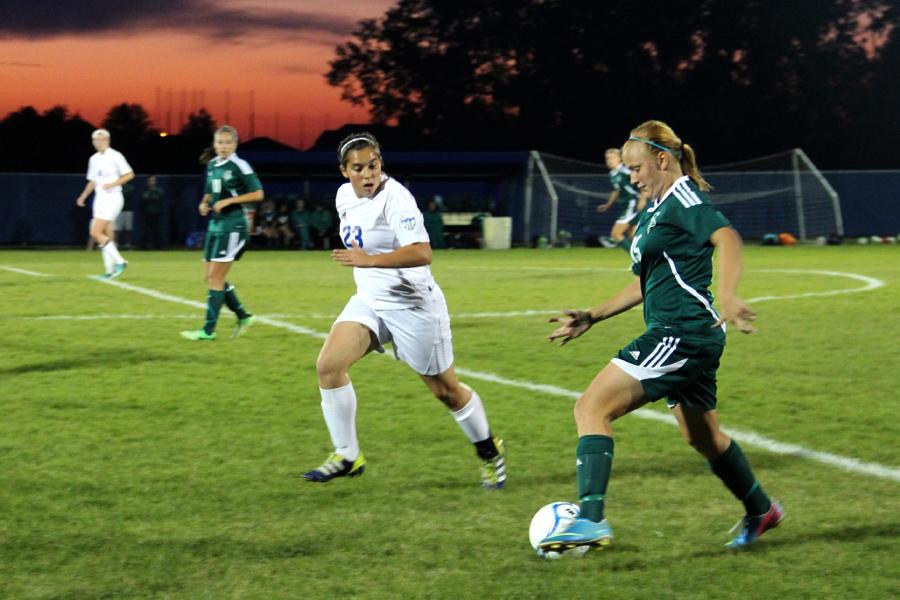 Alexia Laurisch (10) bolts to her opponent in order to turn the ball around. After stealing it, she dribbled it down the field to make a shot.

The girls varsity soccer team played an intense game against one of their tougher opponents, the Valparaiso Vikings on Tuesday, Sept. 24, and won with a final score of 1-0. The Lady Indians persisted until the very end.

“Lindsay Kusbel (11), in the goal, had a really good game. [The girls] were working hard and playing well. They kept their intensity up , and they kept playing hard all the way till the end. [Valparaiso] was one of our tougher opponents, but not the toughest we’ve seen, and not the toughest we’re gonna see,” Coach Julie Moore said.

The girls persisted in this difficult game against Valparaiso, but neither team scored until the end of the second half. This lone goal, scored by Jillian Doan (11), was just the push the girls needed to keep their energy high.

“I feel like we played with high intensity and we did really good overall,” Doan said.

Kusbel blocked every shot made by Valparaiso; the game ended with a final score of 1-0.

“I think the rest of the season will be good. We have learned to work together and we now are a second half team so i feel like we give it our all every second on the field. We could go pretty far,” Doan (11) said.

The girls’ next game is on Saturday, Sept. 28 at Lake Central against Penn High School.