The beat of their own drum 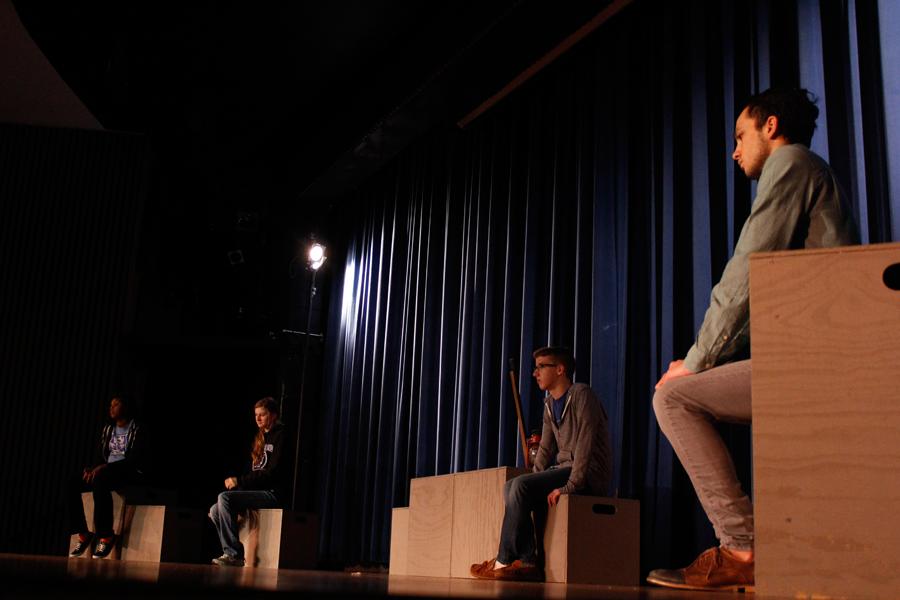 Jonathan VanHecke (12), Adam Gustas (9), Nichole Heusmann (10) and Raquel Rembert (10) listen to directions during the rehearsal for “Drum Taps.” The four were chosen as the cast for the competition show.

Traditionally, Lake Central Theater Company puts on three major productions during the school year: the fall show, the musical and the student-directed freshman shows. This year, a fourth production, an adaptation of Walt Whitman poems titled “Drum Taps,” was added to bring to the Regional and State thespian competitions.

“There was a time that the theater company did do a competition show and a fall show [separately]. This year, I think not bringing [“The Somewhat True Tale of Robin Hood”] to Regionals shows the diverse abilities that we have as a company,” Paige Kruk (12) said.

Last year, LCTC took first place at the Regional competition with “The Harvey Girls” and went on to place fifth overall at State. Competing this year means defending their Regional title.

“Our best strength is our unity. The [actors] range from freshman to senior, but that doesn’t create any kind of division. The crew knows each other, and there is no tension. The more that we work together, the tighter bound we become,” Aidan McCambridge (11) said.

With the cast and crew traveling to Bethel College on Nov. 16 to compete and the “Somewhat True Tale of Robin Hood” opening on Nov. 21, some actors and crew members found themselves a part of two shows at once.

“I wanted to be part of both [shows] because I never wanted to miss out of a LC show. I try to do as many as I can because the years go by fast and before you know it, it’s over,” Raquel Rembert (10) said.