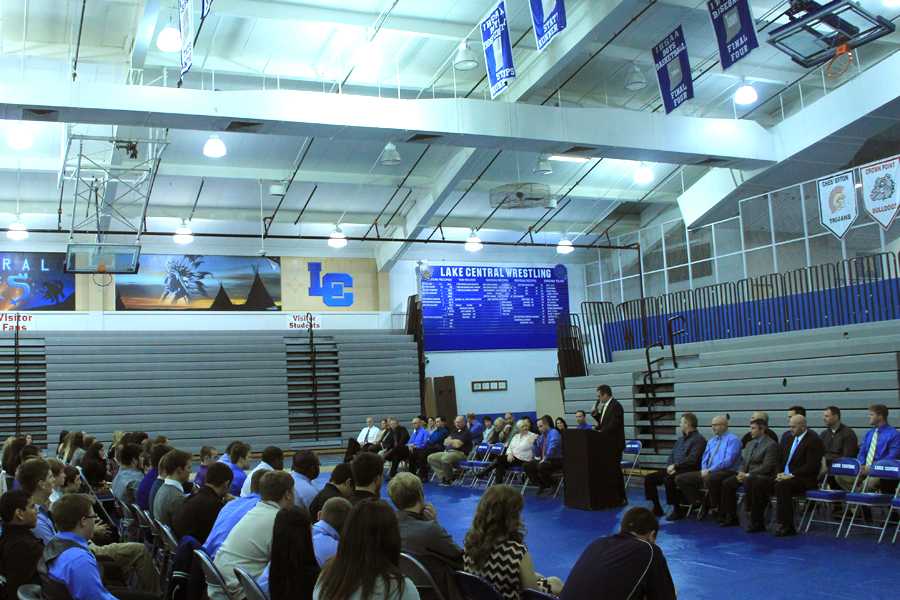 Football Head Coach Brett St. Germain acknowledges the varsity football team for their season, including their Sectional win, in front of parents and athletes. St. Germain was speaking at the fall sports banquet held on Nov. 20.

Fall sports concluded their seasons at the sports banquet on Nov. 21.   This banquet is held every year to honor the fall sports teams’ accomplishments.

The evening started with dinner at 6 p.m. for athletes, coaches and parents.  Once they were finished eating, they moved to the gym and listened to speeches from the fall sports coaches and Tony Bartolomeo, Athletic Director. Bartolomeo thanked all of the coaches for their effort and acknowledged the athletes for their success.

“The athletic director is very professional, and it’s great that he hopes the best for us.  He’s not just a teacher and director, but also a friend,” James Lafakis (11) said.

After Bartolomeo gave his speech, the coaches gave individual speeches about their teams.  The coaches recognized each player and the athletes in the audience followed this with a familiar, single clap.

“It’s a tradition for us to clap one time after each players’ names.  I guess everyone thought the single clap would take less time than a full applause and everyone just stuck with it,” Andrea Hynek (11) said.

Even though the coaches wanted the audience to hold their applause, the athletes continued to clap.  After naming off the players, the coaches acknowledged the graduating seniors and athletes with at least a 4.0 GPA.

“I think the sports banquet is a nice thing to have because it gives players a chance to be recognized both on the field and off,”  Colin Chenoweth (11) said.

At the end of the assembly the teams separated into different classrooms according to their specific sport. Coaches handed out awards to their significant players, officially ending the night and their seasons.