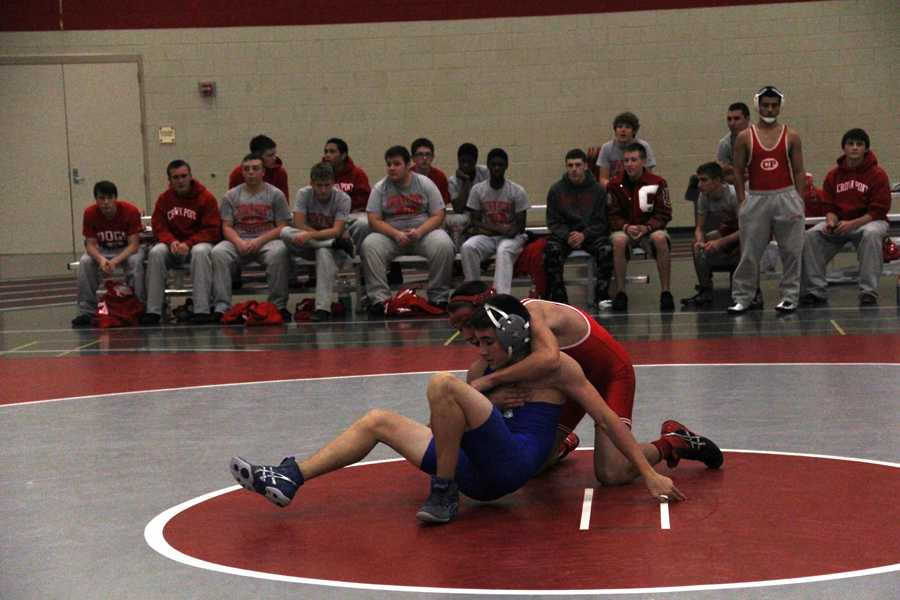 Benamin Geyer (10) wrestles his opponent on his first meet of the season. Although he did not end up winning his first match, he won the second.

JV boys wrestling won 16 matches and lost 32 at their first meet with Crown Point on Saturday, Nov.23. Just before the matches, the boys huddled with their coaches for inspiring advice. They put their hands in as a team for support prior to the first round.

“I expect the boys to wrestle hard and improve each week to perform well in the season,” Coach Josh Morgan said.

Cheers roared in the gym from supporting parents, coaches and teammates when Nicholas Lucas (9) won 5-4.

“It was a good match. In a way, it was kind of like repayment because [the Crown Point wrestler] always used to beat me in middle school. Now that we’re in high school, it feels good to finally win,” Lucas said.

At the end of meet, many of the wrestlers had cuts, bruises and burns from the mat. Sweat covered their skin as a symbol of hard work and effort.

“We’ve been practicing harder this week, and hopefully we will do better this weekend,” Lucas said.