Diving into the talent pool 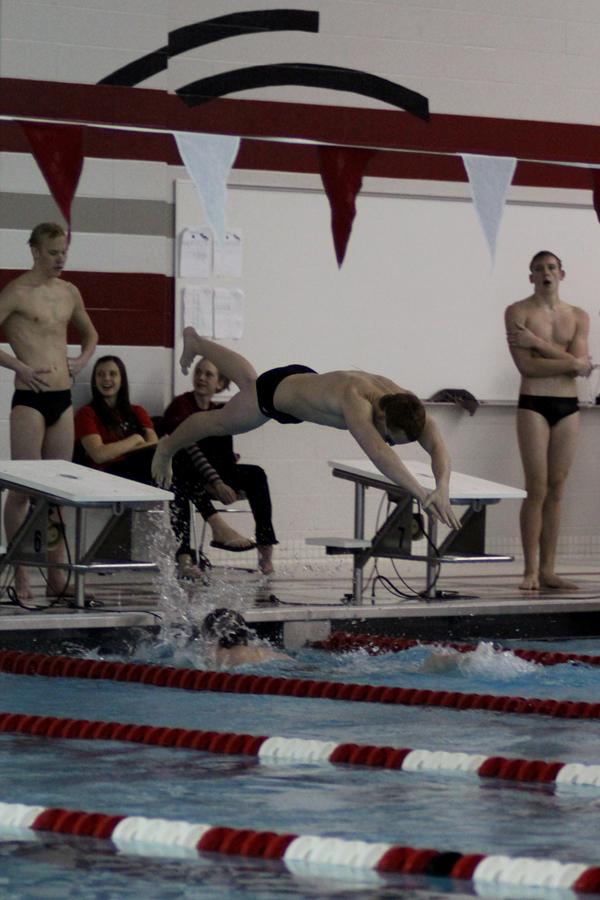 Gavin Basil (11) dives in exchanging with Tyler Hires (11) in the 800 free relay at Munster’s 47th Annual Munster Relays on Dec. 7. The boys finished fourth in this event.

In a meet composed entirely of relays, the boys varsity swim team placed third with a score of 102 at Saturday’s 47th Annual Munster Relays at Munster High School.

Only six points above LC, Crown Point took second while Munster took first with 130 points. Based on previous performances, the team expected the general outcome of this meet.

“The meet went about as well as it could have. We had some fantastic swims and a lot of kids stepped up. We performed well,” Jeff Kilinski, head coach, said.

Though most of the events at Munster Relays are not part of typical high school swim meets, the boys were able to experience the talent they will be swimming against in the future.

“We learned that we can compete with almost all of the teams in the area and that we have swimmers that have stepped up this year to help out the team,” Joshua Barajas (11), swim captain, said.

The boys won the 200 medley relay, the 400 breaststroke relay, and placed second in the 400 freestyle relay by only six-hundredths of a second.

“We’ve been working hard at practice, and I feel like all the work we put in paid off in [the 400 breaststroke relay],” Jamiere Wilson (11) said.

At this unique meet, the coaches were able to learn more about their swimmers’ abilities that will help them make future decisions.

“We base relays and events on relay splits so we got to see where some kids are in things they normally wouldn’t swim,” Kilinski said.