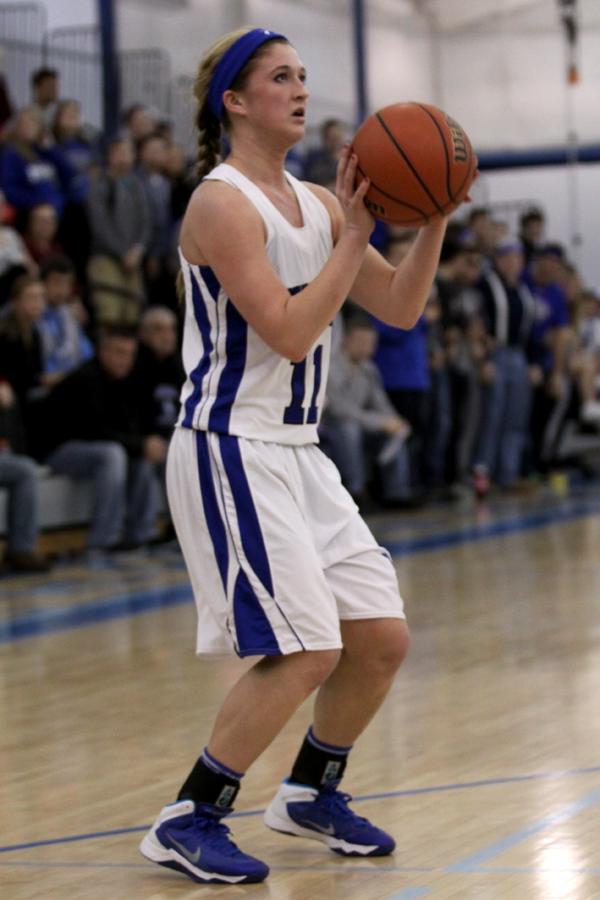 Tara Zlotkowski (11) prepares to make a shot during the game against the Merrillville Pirates on Fri. Dec. 6. Zlotkowski contributed 15 points to the Indians victory over Merrillville, 65-57.

On Dec. 6, the varsity girls basketball team hustled at their game Friday night and defeated Merrillville 66-57.

“I think I played well. I was happy that I kept shooting the ball even after a few misses, and my teammates did a good job of keeping my confidence up,” Rubino said.

“Altogether as a team I think we played very well. We did all the little things and kept our focus throughout the game. There isn’t anything I would change about the game last night besides the fact that if I would have made my one free throw I missed I would’ve had 30 points,” Rubino said.

By halftime Rubino had already made 24 shots and the Indians lead 43-27.

“As a team I feel as if we played together as one and we all had a lot of confidence. I think for myself individually I played decent, my main goal was to get as many rebounds as I could,” Kusbel said.

With that being said, LC was at 6-1, giving Merrillville their first loss of the season.

“I think we all played really well. I think that every single one of us came together as a team to get the win; it was a team effort, and we won as a team. We executed all the little things to win,” Christine Addison (12) said.

The next game will be on Friday, Dec.13, in Michigan City.