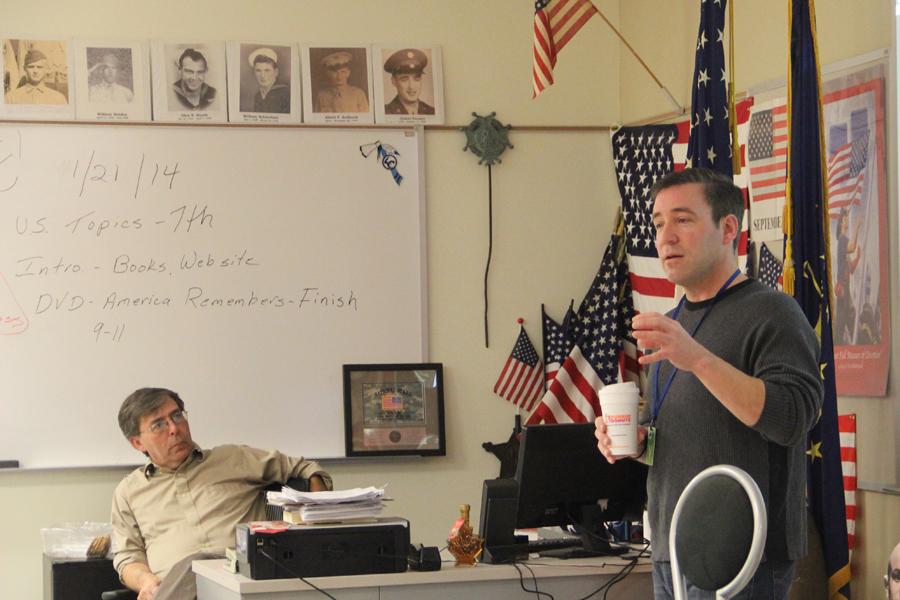 Bacso was on the 57th floor the North Tower of the World Trade Center, the first building to be hit by Al-Qaeda terrorists on the morning of 9/11. Because Mr. Clark’s class started the semester learning about 9/11, Bacso came in to share his story of how he made it out alive.

“[I speak about this] to keep the memory of those who didn’t make it out alive,” Bacso said.

After the attack, Bacso joined the Lake Central School Corporation School Board, where he now serves as vice president.

“He cares about what he does. He cares about the students and he actually believes in us and our futures. He is a genuinely nice guy,” Brandon Cole (12) said.

Clark’s students were speechless through the majority of Bacso’s speech, asking questions about that fateful day at the end of the hour.

“I thought it was awesome, I thought it was inspiring. He was just amazing, he blew me away. As someone who is in the military, it’s great to see what I’m fighting for. I like how he refused to back down and be afraid, and he stands up and tells his story to inspire other people to tell them not to be afraid and not to lose hope,” Cole said.

Bacso tells his story at many schools, both in and outside of the corporation to keep the memory of the nearly 3,000 lives lost alive.

“It’s something that if you’ve gone through that, I don’t understand how you could not go out and speak about on behalf of those who weren’t fortunate enough to make it out because they were just like me–just going to work,” Bacso said.