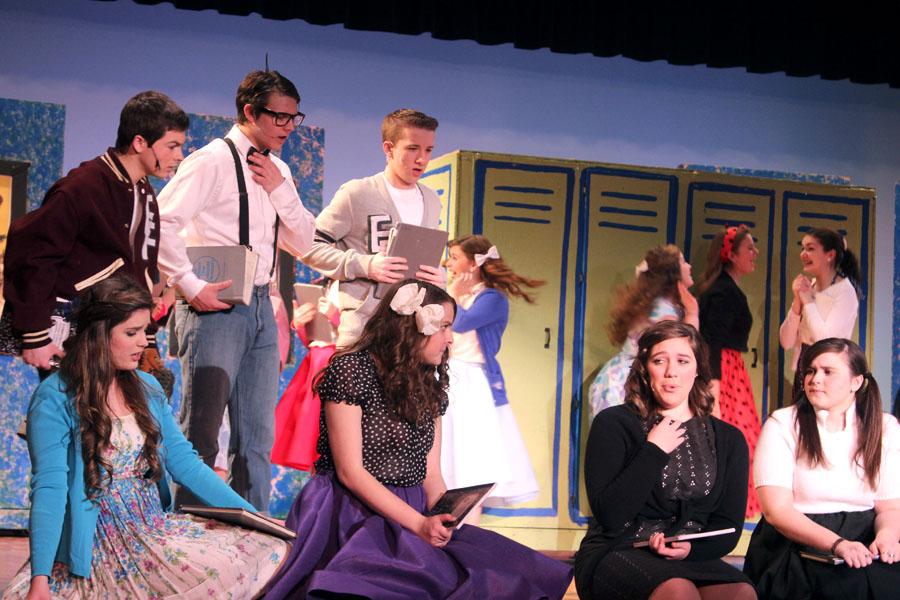 Austin Traina (10), Brett Balicki (10), Adam Gustus (9), Madeline Conley (11), Madison Breford (10), Lauren Bourget (12) and Caroline Janiga (12) practice a scene in the musical, Zombie Prom, during tech week before opening night. Bourget’s character, Toffee, was mourning the loss of her boyfriend as her friends attempted to console her.

This year’s musical, “Zombie Prom,” by John Dempsey, has finally arrived at its opening night today, Feb. 13 at 7 p.m. The cast and crew have been preparing this show since early January and are performing the show a month earlier than spring musicals in the past.

“It’s been rough because we’ve had to throw in practices here and there and practice on our own,” Emma Rose (12) said.

The musical this year is different from the others that the Lake Central Theater Company has done.

“Last’s year’s show had a serious message, and this year’s is much more lighthearted. It’s also shorter because we’ve lost six practices and have to perform a month early,” Mrs. Pam Neth, English, said.

This musical also focused on technical aspects that were not as prominent in previous shows.

“Being in props was very difficult because this is the most prop heavy show I’ve seen in a while,” Nichole Heusmann (10) said.