Varsity hockey skates by Crown Point for the win 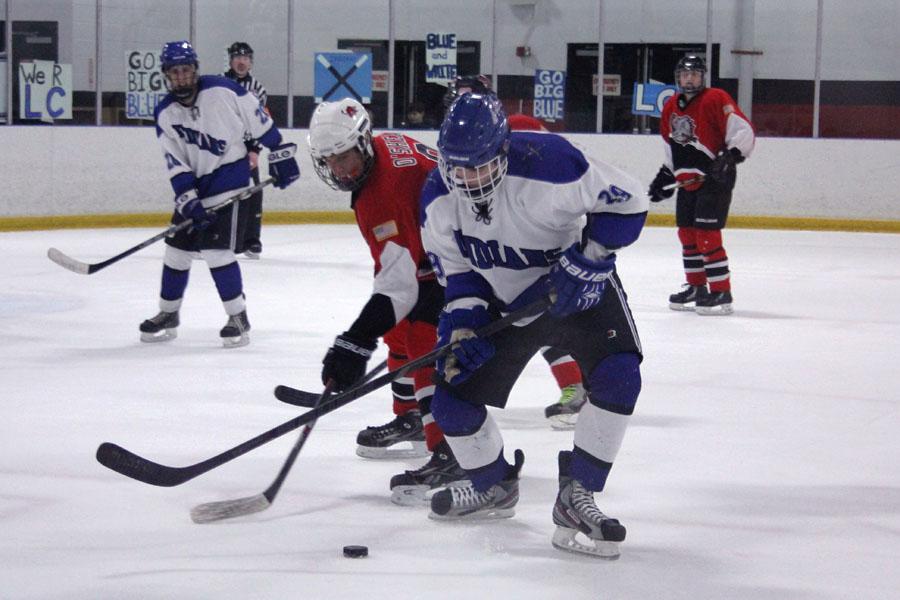 Aaron Ludwig (11) hits the puck to a nearby teammate. Ludwig successfully passed it, and the team’s fifth goal was made against Crown Point.

Last Sunday, the Midwest Training and Ice Center was filled with the sounds of cheering fans and scraping ice. The boys varsity hockey team was facing Crown Point in the final game before the League Finals and State.

“The boys have played really well this season. This is the first year we are in 5A, the top division for the state tournament,” Head Coach Brian Black said.

The game ended in a 9-2 win for the hockey team, with the first point scored within three minutes of the first period.

“I think the game was a pretty good one. We’re a very confident team, and we’ve already beat Crown Point a few times before,” Aaron Ludwig (11) said.

The team averaged three goals per period, with a number of shots blocked by their goalie, Jeffrey Vervlied (12).

“I like having the stress on me because I don’t want someone else to be able to decide the game. I like to be one of the deciding factors,” Vervlied said.

After this game, the team will practice in preparation for their state preliminaries and finals. This is the first year that the team will be playing in the 5A division, the first team in Northwest Indiana to do so.

“We will have to work hard and hope that all our hard work pays off so that we can come home with a state title,” Luke Glover (12) said.