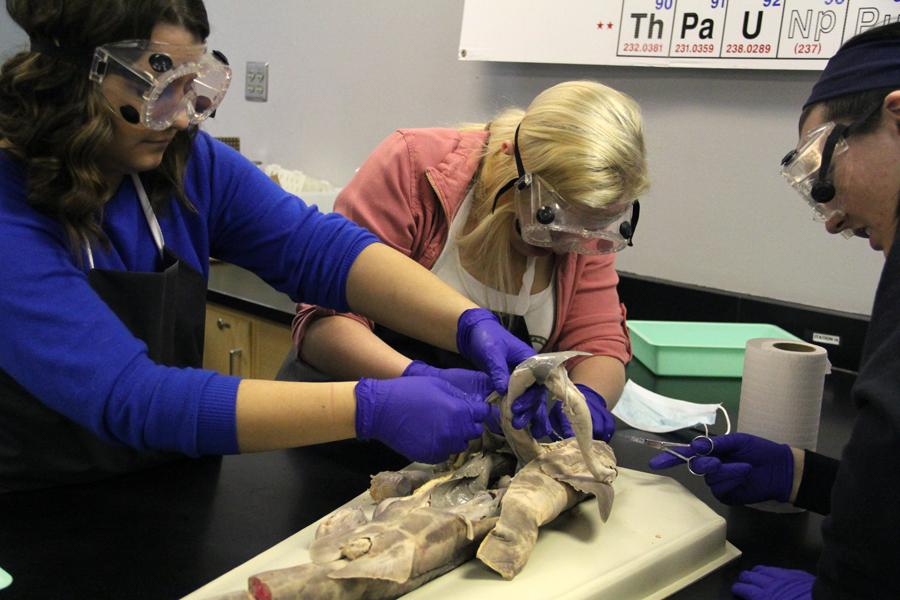 Samantha LeRose (12) , Tiffany Jessup (11) and Elizabeth Seymour (12) begin the dissection on the shark. They had to identify each part of the anatomy of the shark.

On Feb. 11 Mrs. Lisa Moreno’s, Science, Zoology classes started their first dissection on a dogfish shark. Throughout the week the students learned about the anatomy of the shark.

The students prepared for the dissection by taking the pre-lab quiz. On it was names of the fins and organs inside. After the quiz the students went ahead to their lab tables in order to begin the dissection.

“The dissection was really fun. We got to learn a lot about the shark. I liked finding the babies in the mother’s stomach,” Alisha Donovan (11) said.

Donovan’s lab group found a total of five shark babies in the mother. Every lab group had at least two babies. Dissecting pregnant sharks proved to be more informative.

“The best part was exploring the anatomy of the shark, but the worst was the odor from the shark,” Elizabeth Seymour (12) said.

Numerous students complained about the smell. Mrs. Moreno supplied the students with mouth masks to lessen the stench from the animal.

This dissection was the first of many for the class. In the future the class will be able to explore the anatomy of a pig, a pigeon and a frog.

“I’m looking forward to dissecting the pig because I like pigs,” Donovan said.