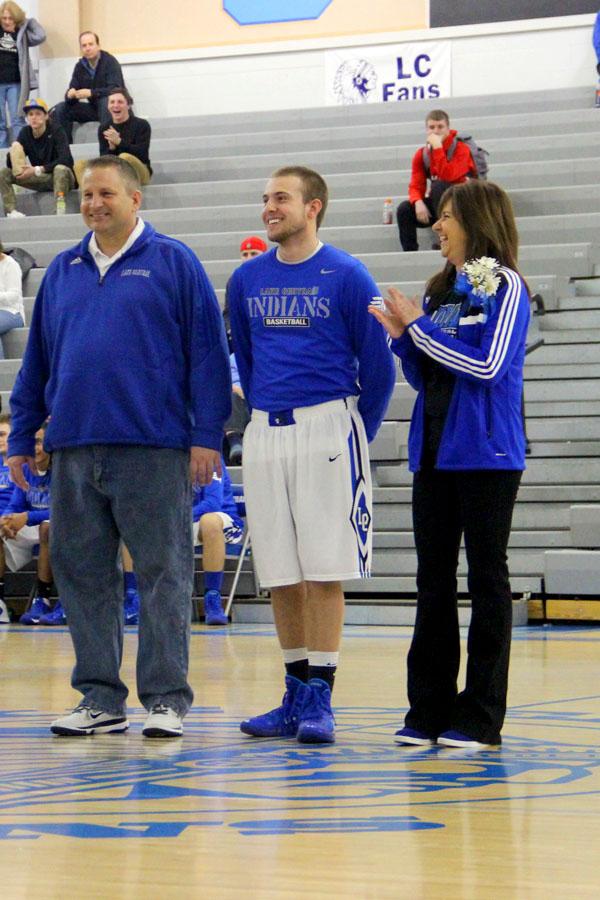 Matthew Meneghetti (12) and his parents laugh as they walk across the court for his Senior Night. This was his last home game and was against Michigan City, with a score of 70-52 LC.

The Indians took on the Michigan City Wolves at Lake Central’s basketball court on Thursday, Feb. 13.This game wasn’t just any ordinary game. It was senior night for boys basketball, cheerleading, girls gymnastics and athletic trainers.

At the beginning of the game, the seniors walked across the court linked arm-in-arm with family members.

“[Senior Night] was sad because we have all been playing here since freshman year, and this was going to be the last game ever playing on that floor,” Matthew Meneghetti (12) said.

As seniors walked across the court, their achievements were announced along with a few words from family members. For some, this part of the night was emotional and hard to believe.

“It was really upsetting knowing that this is my last home game because those are the most fun to cheer at. It was sad knowing that my cheer career is almost over because I’m going to miss it so much next year. It just seems like this whole year just went by really fast, and it doesn’t feel like I’m a senior,” Susan Anderson (12) said.

The boys then took on Michigan City as their last game ever playing in that gym. The game came to an end, with a score of 70-52, LC.

“We really wanted to do good this game. It was important to us to remember our last home game on this court as a win for Lake Central,” Meneghetti said.