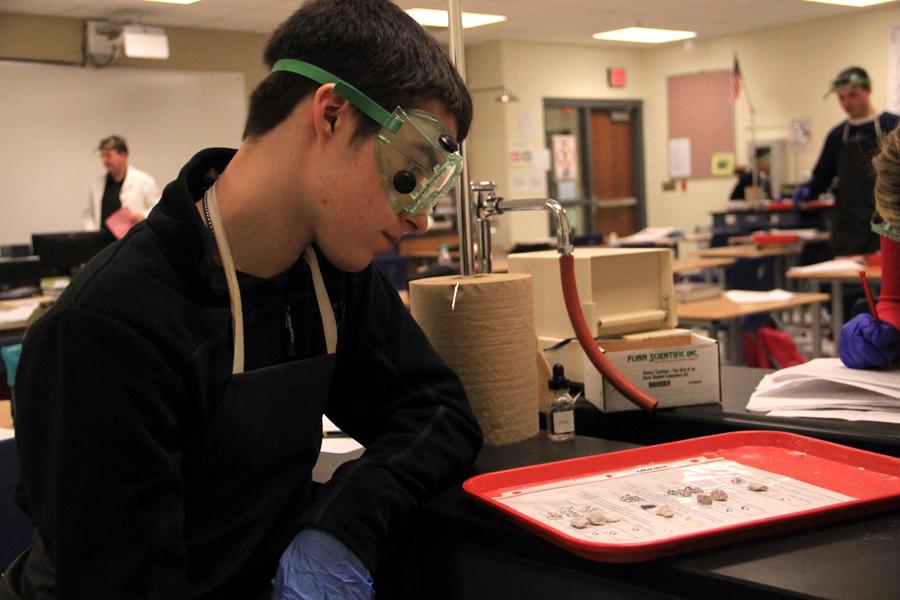 Nicholas Schmidt (10) observes his reactions. The chemicals were poured in their correct positions.

Dressed in their heavy aprons, green goggles and latex gloves, Mr. David Harnish’s, Science, ACP Chemistry Honors class participated in a lab to further their knowledge on how changing factors of chemical materials affect their reactions.

“The purpose of the lab is for the students to be able to see, in a lab situation, some of the topics that were covered in class; which were the collision theory and radio reaction,” Mr. Harnish said.

The students tested how changing the temperature, surface area and concentration affect the rate of reaction. Different chemicals were used to give the students a perspective from more than one substance.

“I think it’s always important, when you’re talking about something in the lecture, it tends to be very abstract, so now they actually get to see what they were hearing about in the lecture,” Mr. Harnish said.

During the lab, students touched base with each other to stay on track and to make sure they were getting similar results.

“I like doing labs in this class because when he’s talking I don’t really understand what the concept is, but doing the lab, it teaches you the concepts,” Kelsie Verhoeve (10) said.

When two chemicals mixed, there was either no reaction, some reaction or a high reaction. The lower reaction usually resulted in a little fizzing; however, the high reaction resulted in steam, fizzing and the spreading of the newly formed mixture.

“The lab gave us a visual perspective on how reactions reacted faster with other substances and other acids and such,” Dane Jevtic (11) said.