Set fire to the nail 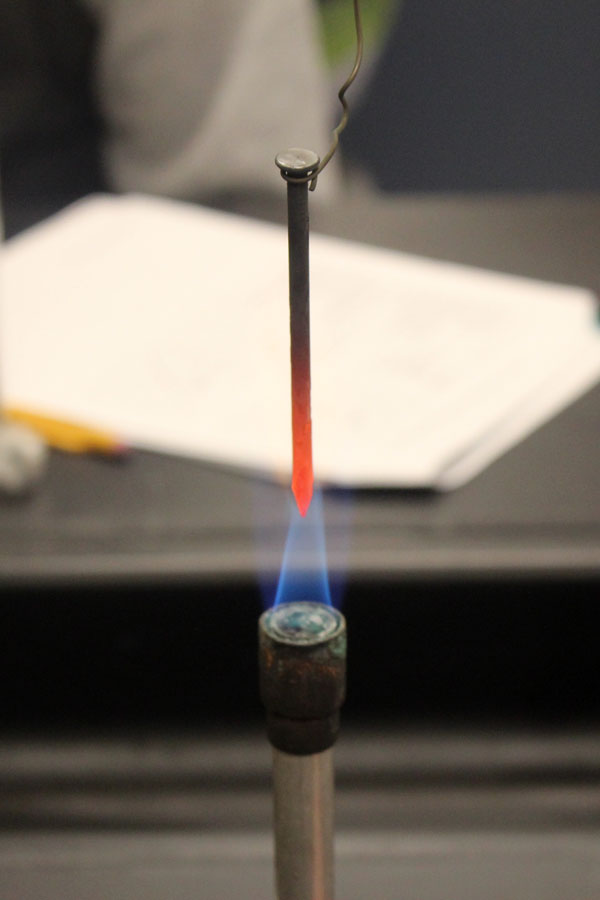 Students heat up a nail over the bunsen burner. This was the main part of the lab, and after they measured the temperature difference.

On March 18, Mrs. Roberta Harnish’s 2nd hour Chemistry Honors class engaged in an experiment which helped show the students the process of heat transferring from one object to another.

“I think that the lab went well, as students were well-engaged and were able to collect valid data. Based on percentage-error calculations, it was clear that students were able to apply class topics to the lab. Students were [also] able to generate logical reasons why their error values occurred, which requires application of the concepts to their unique situation,” Mrs. Harnish said.

While the lab was a learning experience, the students seemed to be intrigued while doing the lab and gain valuable knowledge.

“The nail got really red and I thought it would hurt when you touched it. I learned that you can figure out temperature increase by heating something and putting it in water and then measuring the temperature of the water,” Collin Keylor (10) said.

There were six different lab teams that did this experiment. Each team had their own dynamic that allowed them to accomplish the tasks at hand.

“[My partners] pretty much let me do the whole thing. We worked well enough together, but I would have made sure our bunsen burner sit flat because it was going on an angle half way through because the cord wouldn’t straighten out,” Keylor said.

Even though Mrs. Harnish has done this lab before, there is always room for improvement to make the lab more sufficient.

“As far as doing anything differently, I simply wish we had a bit more time so that students could complete multiple trials and create class data by period … and then compare those numbers,” Mrs. Harnish said.